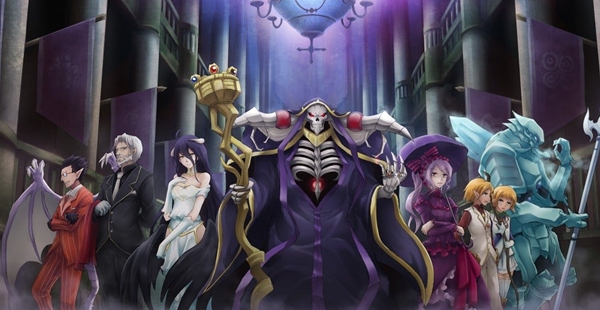 This anime tells the story of a game called Yggdrasil. the game is played by experiencing it directly in the game there is a player named momonga. he was the chairman of the Guild and its guild was named Ainz Ooal Gown we just call it AOG its total members are 41 That day was the last day the game was run, only Momonga was still logged in and waiting for the game to be deleted At that time he had many servants and they were NPCs (Other names are Pleadies) then arrived 12.00.

The game is still intact.

All NPCs could move on their own and had personalities momonga ordered all the guards to gather some guards made by AOG members the 1st 2nd and 3rd floor guards named shalltear bloodfallen maker named Peroroncino the 5th floor guard named Cocytus maker named takemikazuchi 6th floor guards named Aura Bella Fiora and Mare Bello Fiore maker named bukubukuchagama the 7th floor guard named demiurge named him Ulbert lastly the supervisor of all the guards was named Albedo maker named Tabula for the 4th and 8th guards were not there they all lived in the Yang base called the Great Tomb of Nazarick and had several floors the assembled floor guards bowed to Momonga momonga told Mare to build a wall around Nazarick By the way, he made a plan, namely looking for rare treasures and wanting to rule the world It is known that Momonga is a magician the world is no longer YGGDRASIL because of some changes and differences we call it the New World at that moment momonga gave Albedo and Mare the AOG ring the effect of the ring is that it can move freely across Nazarick's floor One day Momonga used a mirror to see the situation around Nazarick He was accompanied by a servant named Sebas.

In the mirror was a village called Carne the inhabitants there were attacked by an army of knights Momonga went to the village to test his skills he killed the Knights with the magical abilities he also saved the villagers who were still alive momonga accompanied by albedo after that he asked the villagers for information, namely information It is known that the money from YGGDRASIL does not apply in the New World. the villages of karne and nazarick were part of the kingdom re-estize continued in the afternoon there was a troop of knights who arrived his chief knight was named Gazef Stronoff. he and his army were from the re-estize kingdom they have orders to protect Carne Village then there is a magic army that surrounds the village from afar they are from the Slane kingdom the goal is to kill the gazef Gazef and his subordinates immediately attacked them in the middle of the battle Gazef and his subordinates were dying.

Momonga and Albedo helped him while Gazef and his troops were transferred to the village enemy attacks cannot injure Momonga so the battle is won by Momonga and Albedo then by the way change the name to Ainz Ooal Gown.

Let's just call Ainz the next day Ainz searched for more information about the new world Ainz went to a nearby town called e-rantel it was a city of many adventurers Ainz with his servant named Narberal they pretended to be novice adventurers. his name was also disguised as Momon and Nabe At that time the moment was a bit of a fight with people around, causing other people's potions to break he replaced them with red potions the person immediately went to see a medicinal expert to find out the quality of the potion there are famous people in town.

Her name is Nfirea Bareare he and his grandmother named Lizzie Bareare it turned out that the red potion was a perfect potion Then Momon and Nabe go to the Adventurer's Guild to find missions and earn money their momon and nabe meet with the adventurer's team his names are Peter Valve Dine, Ninya. then Nfirea came, he gave a special mission for the six of them, namely help him collect medicinal herbs in the forest near the village of Carne so they all went to Carne village In the middle of the trip there were many monsters that came they killed all the monsters easily the next day they arrived at the village because Nfirea met his friend in the village whose name was Enri he and his sister were once rescued by Ainz when the Village was attacked by a group of Knights while his father and mother have been killed At that time, Enri talked about Ainz, one of which was that Ainz had given him a red potion.

As it turns out, Nfirea realized that the momon was Ainz Nfirea immediately went to see Momon, he told Momon's real purpose, which was to make red potions After that, they all went to the forest to look for medicinal herbs but there was a monster called the wise Forest King Nfirea told Momon and Nabe to sort it out they both went to the inner forest.

In that forest there is Aura so momon told Aura to lure the king of the wise forest a few moments later the wise Forest King came and the moment made him tame finally the mission was successful. And they went back to the city again the moment of bringing the king of the forest wise and giving the name also, namely hamsuke after that moment and nabe came to the chemist shop to ask for a reward when I got to the shop there was Peter valve Dine Ninya that was dead while Nfirea had disappeared Lizzie asks Momon and Nabe to save Nfirea Moment and Nabe immediately made plans It is known that Nfirea's location is in a cemetery near the City. So they went straight there in the grave there is a lot of zombie / undead troops momon can kill zombies easily.

In the middle of the battle, Momon and Nabe show their real self, namely Ains and Narberal then the fight was won by Ains and Narberal Nfirea has been rescued Ainz sent Nfirea and Lizzie to Carne Village. he also had them make potions for Nazarick next shalltear and sebas go outside Being ordered by Ainz. there sebas with the waitress (Pleadies) too she was named Solution while shalltear with his subordinates on the way they were attacked by strangers shalltear and his underlings kill then quickly. then sebum and solution parting with shalltear shalltear continue on his journey with his subordinates it is known that Shalltear is a vampire he can transform into a vampire At that time shalltear fought many people The next day Ainz received information that Shalltear had rebelled.

Ainz had to find out the cause so Ainz and Albedo went to see him the location is in the forest near e-rantel city it turned out to be shalltear like being controlled by someone Ainz tried to undo the effect with the ring ability called Shooting Star the result is the ability does not work Ainz realized that shalltear was affected by the World Item effect.

World Items are items that have the most powerful abilities After that Ainz and Albedo went to the treasure room in Nazarick.

They are with a servant (Pleadies) named Yuri there they met the guardian of the treasure room. his name is Pandora's Actor it was discovered that Pandora was an NPC made by Ainz then Ains and Albedo went to the treasury section of the monument. in the room were many Golems the shape is like AOG members the AOG ring must be removed so that the Golem does not attack Ainz still doubted whether they (AOG members) would still exist or not in the new world Then Ains wanted to take the World Item that was there and give it to the guards he wanted to fight Shalltear alone and use some equipment then Ainz went straight to meet Shalltear shalltear hasn't moved yet because it hasn't been attacked yet.

It's almost the same as in the game.

So Ainz made preparations in advance such as increasing defensive attacks and so on then Ainz began his battle with advanced magic. turns out ShallowTear is still alive and can move their fight was resumed. In the middle of the battle, Ains uses an AOG member armor called touch me he also used weapons belonging to AOG members in succession including Peroroncino's weapons the result was that the battle was won by Ainz. Ainz planned to revive the shalltear eventually shalltear come back alive and uncontrolled Ains still doesn't know who is controlling him Sebas before returning to Nazarick. so Ains wants to solve that problem someday

Okay friends, so this is the entire anime storyline of Overlord season 1. Thank you if you have read this article, wait for the next article from this blog and see you later.