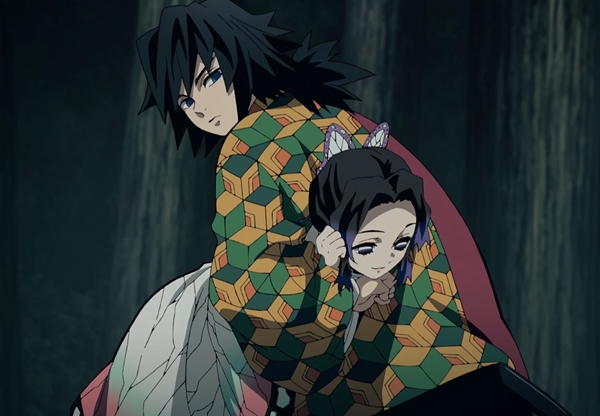 Giyu Tomioka is the first, Hashira character to be shown in the manga series. And anime, Kimetsu no Yaiba with a personality that seems cold and, the cold expressionless face actually makes him one of the favorite characters in, this anime, series, even so, there, is one other. Pillar character, who is portrayed close to him? He is a pillar of insects that is Shinobu Koco when rescue mission of Tanjiro and friends on Mount Nata, Gumo Shinobu Kocho seems to have known the character of Giyu Tomioka. Well, this happened because Giyu Tomioka and Shinobu Kocho have been on several missions together.

This story takes place sometime after Giyu Tomioka first. Met Tanjiro and Nezuko let's just start the story begins when Giyu Tomioka met, a. Demon who was eating a woman's body out of fear, knowing that Giyu Tomioka is a dimensional layer demon, then begged Giyu Tomioka, to forgive him G, who did not believe the devil's words said that he would still kill the demon, then straight away, attacked Giyu Tomioka and with one swift Motion Giyu Tomioka cut off his head with water-breathing stance. After that incident, a crow came with a mission for him. 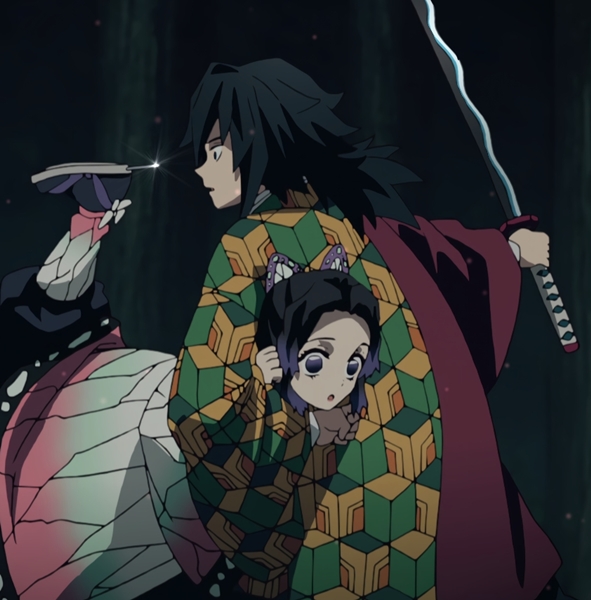 The crow then told Kyu to go to mountain snow to investigate some of the deaths that occurred at the hands of the devil. Without thinking, Kyuhyun went straight to the intended place, The story switches to showing Shinobu, who turns out to be in the village near the snowy mountains to which Giyu Tomioka was headed, was shown at the moment. Shinobu was talking to an old woman at a teahouse. The old woman then told her about the rumors of a man-eating bear inside mountains. It is said also that the bear has eaten some matagi from the village.

Matagi is the name for the villagers who work as hunters before their conversation continued. Suddenly a voice was heard. The screams of the man who was scolding, a girl, the boy scolded because you went to the mountains alone - Self story short. It is known that the girl named Yae, the old woman with Shinobu, then told him that he had always wanted to go to the mountains alone herself to take revenge because she witnessed her father and friends who were in G's eye killed after being attacked by the Bear Shinobu, who heard that became pity for him, but then Shinobu's expression changed became shocked when he was about to run to the mountain suddenly stopped by a person. The man turned out to be Giyu Tomioka after Giyu Tomioka introduced himself.

Without further ado. He immediately asked Yeay about the devil he had met. The question actually confused the villagers because they obeyed. They are the act of a bear feeling suspicious because he saw Giyu who was carrying a sword with an unusual outfit. The villagers asked whether Giyu Tomioka is a cop. 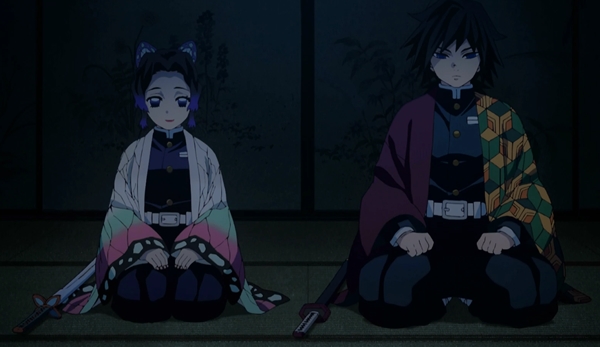 He innocently replied that he is, was a demon hunter. That answer actually made the villagers even more confused, because at the time not much knew about it. The villagers' demon hunters became even more suspicious after one of the residents said that he was the perpetrator who massacred the charcoal seller's family, namely Tanjiro's family. This is because these residents heard the news that the perpetrator Khairi wore striped clothes that were similar to Giyu Tomioka's because they were residents. The village began to tie Kyu's body with ropes and was about to take him to the police.

Luckily, Shinobu immediately came and offered Giyu Tomioka to explain to the villagers, but unfortunately how to refuse Shinobu's offer and that it makes Shinobu annoyed with him. Meanwhile, he is confused about Their conversation. Suddenly dropped and Shinobu passed out saw him passed out instantly, Sai condition. Yes, he Then said that he has a fever and should be treated immediately after Giyu Tomioka, easily decided on who tied it and finally wanted to work with Shinobu Kocho short story. After ya woke up from fainting.

He was already there at the medical house, after which Shinobu gave him a drink, contained medicine, and explained that he had been unconscious for half a day on Another tooth room was sitting together with the pet dog of Yep named Taro funny when his teeth were about to Stroke Taro's head the dog instead biting Giyu Tomioka's hand and didn't want to let go of it. 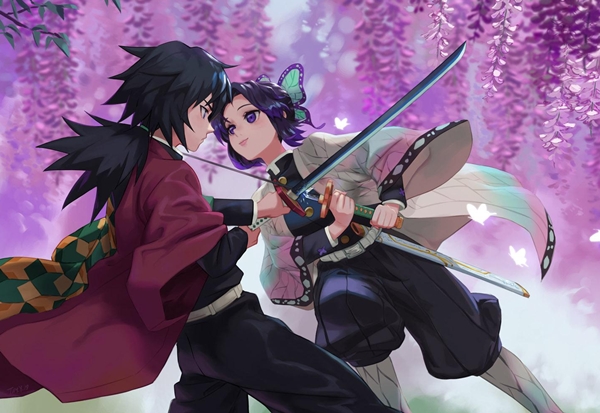 Gile started panicking shook Taro's body when the two of them fought more and more called Taro and apologized to Giyu Tomioka for his dog's behavior, but Shinobu casually replied that he didn't have to worry because of the geomembrane get used to it. Hi, then Shinobu started questioning the verse about the incident experienced by his father. Shinobu then said that what yay saw could be the act of the devil ago, convinced Shinobu, that what he saw was a bear after answering Shinobu Kocho questions, he changed Asking him about What is the devil and who is meant by the demon. Hunter Shinobu, then, explains all The answers to the question.

Yay Shinobu also offers yes to yes, helped him kill the bear in question, but unfortunately, he refused offers from Shinobu Kocho and said that he was an eye. Gih yang can solve the problem on his own hi when he said goodbye about to continue his hunt. Giyu Tomioka confronts him and says that it is not good to walk alone at night. But yes, Eh replied that there are no demons around here and no one wrong for a matagi to hunt a bear. He continued to ask her why she went to the mountains to take revenge alone.

Did he hide something from them? Hearing Giyu Tomioka's question he had instead became angry and shouted that Giyu Tomioka was the one who annoyed him, then immediately left them after arriving in the mountains, snowing together with Taro. Yes, then approaching his former house became a pile of wood and started Praying there, while at the medicinal house Shinobu, who was suspicious about the bear that was mentioned by y, started, discussing it together with Giyu Tomioka in the end, Shinobu and Giyu Tomioka decided to look for him Because they feared for his life, the danger - meanwhile, Yes in the mountains, began to command his dog to find something after the following litter in her blizzard was shocked to find Taro's decapitated, head and body were eaten by a male demon, and apparently all this time, you had known That the man who turned into a demon was his own father. When the father was eating his dog, he then took his rifle and started shooting his father in the head. But even though his father was hit in the head a few moments later, he was able to regenerate. 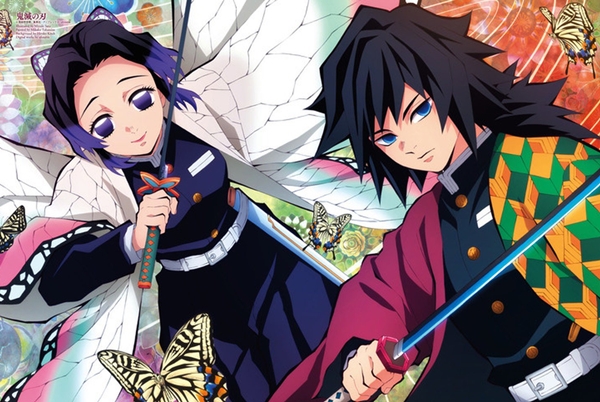 Then the demon started attacking ya, who was shocked to feel that he did not believe that his father had actually become a devil, as she grew more and more helpless against the attack. His father Giyu Tomioka Then came and managed to cut the devil's hand and repelling his movements in uh, then asking Shinobu to take care of the dan himself killed the devil in front of him, but he asked them to wait It made Giyu Tomioka and Shinobu speechless.

Giyu Tomioka then explained to him that they are facing. Now is the devil and not his father. Again after successfully regenerating the demon starts, attacking you crazy again moving forward and releasing its fourth form of water-breathing.

The attack succeeded in cutting off the entire body of the demon and defeated him after his demon father died. He took his rifle and intends to commit suicide. Lucky Kyu immediately realized and ordered Shinobu to prevent his actions in the end. He has regained consciousness after Giu said that he heard his father's last wish is so yes, yes to continue his life after the two Hasira left and the blizzard finally stopped hi when, on the way back after the mission, Giyu Tomioka and Shinobu went to A shop For ordering food Shinobu starts to praise you and think, even though it looks cold, but actually Giyu Tomioka has a sense of Attention to Dear in his own way. Shinobu also asked about what happened so that I can change it like that. 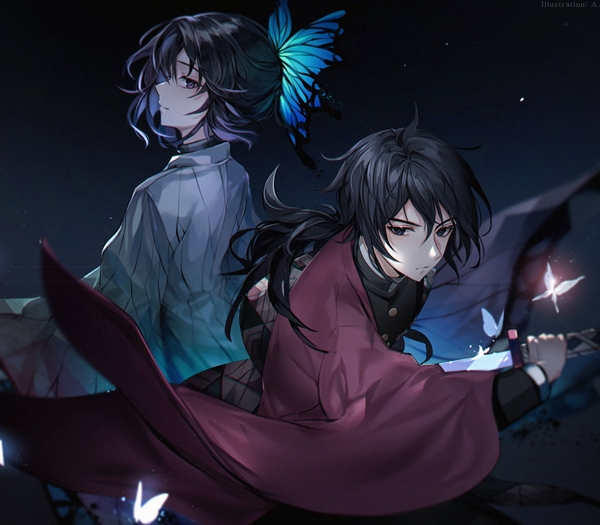 The question from Shinobu made me remembered his teacher's message that Uroko climbed about a pillar who was not will tremble when faced with anything. He also remembers his meeting with Tanjiro and Nezuko, which made him realize the meaning of a pillar while Giyu Tomioka kept talking about himself, who wouldn't be afraid. Shinobu responded by accepting those words, though he does not understand the point.