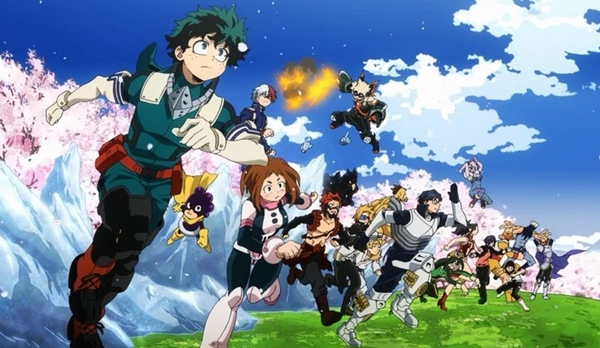 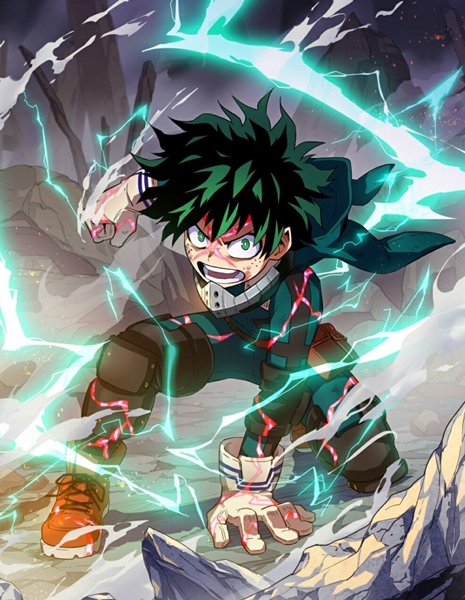 So where we left off, we had Deku a quirk-less wannabe hero in a world of super-powered individuals, we had his idol All Might, a Superman-like figure with dark and potentially devastating limitations, and barely a hint of the many, MANY heroes and quirks still to be introduced. As predicted, Deku actually does indeed gain a quirk though he does it through unconventional means… DID HE EAT HIS HAIR? LIKE Like I mean, it’s kind of cool because you gain superpowers but, Because of this coupled with his rather fragile and quirk-less body, he cannot fully control his newfound powers. This is actually the start of what I consider to be extremely good storytelling done in a short amount of time.

All good superhero stories usually involve keeping a secret identity, though for the most part here in MHA those identities don’t matter to a large extent between the heroes themselves. 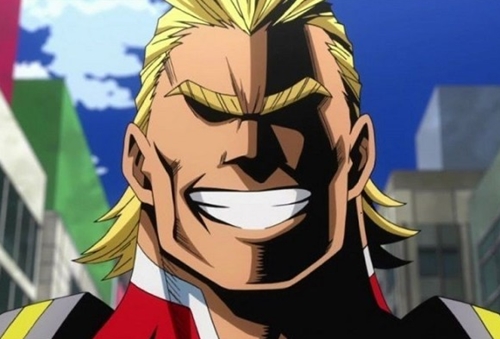 As such, making it so that All Might, the most powerful hero, indeed has a secret identity that must be kept hidden even from other heroes is a fascinating plot point. On top of which, even though Deku is in the process of inheriting the power of One For All, the way that this is handled both makes logical sense, while also being a narrative convenience. Because Deku cannot control his powers it actually ends up masking what his powers actually do. It doesn’t look like he has the powers of All Might because he breaks his bones any time he uses his powers, and All Might always look perfectly fine when he’s going and doing superhero-like stuff, so no one will draw the connection there.

It’s also a perfect cover for his backstory because he could claim that he’s always had this power but he’s never used it for fear of breaking his body in half. Though you know, that would just further the anger of his classmate Bakugo. Now Bakugo is an interesting case as well because we don’t really know where his story is eventually going to end up. Looking at both his attitude and his actions, at times it’s almost foreshadowed that he will eventually not be a hero at all, but rather a villain. And you know potentially playing a major antagonist down the line.

He’s quick to anger, spiteful, and has powers that are far more destructive than most of his peers. On the other hand, it’s also quite likely that he might go the way of Piccolo or Vegeta. Antagonist turned good guy through the power of friendship and what have you. The groundwork for this starts to come later after he and Deku square off and he gets a chance to vent for a while, though even after venting he still holds a bit of a grudge against Deku for a variety of reasons.

Though with luck this potential problem in his personal story can be handled in other ways. 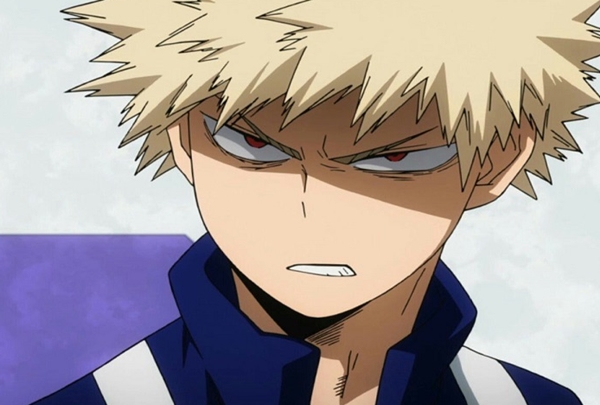 Bakugo is very prideful, and it’s not just Deku that challenges that. In elementary school, Bakugo was the Top Dog, the most powerful, the one that people looked up to out of either respect and fear. But now, in this new environment, that’s not the case anymore. Even among his immediate peers, he’s not more intelligent or strategic, nor even in the realm of brute strength is he on top, and he knows it. This was the part of his arc that I really adored because how both he and Deku handle their peer relationships kind of mirrors my own.

In elementary school, I had few friends, one or two very close friends, and then a bunch of acquaintances who weren’t really friends but at least they never bullied me so they were just kind of neutral, so socially this always had me stuck in this closed-off shell.

It wasn’t until high school where I was really able to make any dent in that shell with not only the change in environment but the massive change to status quirk among my peers. Because my high school was about 3 times the size and had the graduating classes from at least 3 elementary schools feeding into it. In my case, it was like Deku, who never really had friends suddenly finding some that respected him for who he was. Though with Bakugo, it was the opposite, and how he learns and hopefully grows from this experience will be a massive part of his character arc to come.

Too many characters and a very short amount of time 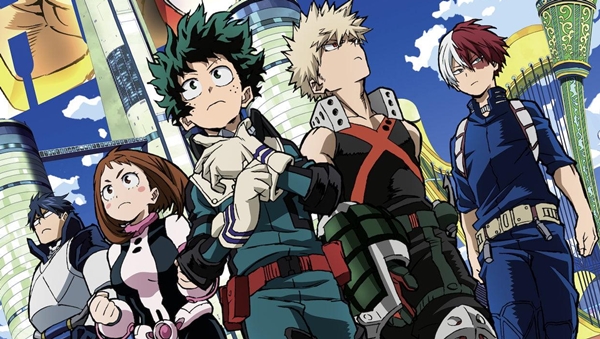 Now one of the problems I’ve been finding with this series is that there are way too many characters and a very short amount of time. Like beyond Deku, Bakugo, and All Might, we have varying degrees of development. As good as characters like Ochaco and Iida seem to be, they get very little screen time to give us any sort of development, we don’t really get a sense of who they are beyond, caring and supportive in Ochaco’s case and the more honorable and loyal in Iida’s case.

This goes for other characters too like Todoroki and Asui, and even the teacher Aizawa, though he gets more screen time than most. You have this massive cast, and only 13 episodes, so characters are going to get left out.

But how everything is laid out is both smart enough or in some ways evil enough to get you to care and appreciate these background characters, but that’s evil because there’s no guarantee that we will see much more of them. So you get attached to them and then they are gone, which is depressing. However, this first season feels very much like a prologue. A beginning, a set-up for what will hopefully be to come. So those characters will hopefully get more storytime, and we can try and sit there and predict what may or may not happen in the future of the story.

Sure you can just read the manga, but if you are like me, that won’t be happening any time soon. And who knows, this is a Bones animated series, so the manga might not matter past a certain point if Bones decides that they want to go another way.

All Might’s having 3 hours a day in Super Mode 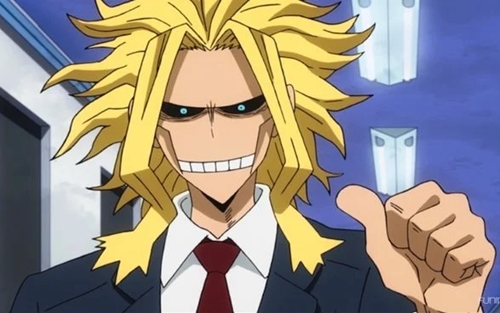 I’m not sure how the manga is handling All Might’s condition right now, and if you know please for the love of whatever god or deity you worship don’t tell me, but honestly, I’m expecting and hoping that All Might’s condition has a tipping point that comes with it soon, like at the start of the next season preferably. He’s the world’s paragon of hope and goodness, and yet almost because of that, he risks it constantly. Despite only having 3 hours a day in Super Mode he squanders most of that doing deeds that could be handled by lesser heroes, only for a situation to come up where he is desperately needed and can barely handle himself.

It’s made obvious at this point that there is some shadowy entity that wants him dead but All Might dying would be a massive blow to the morale of the citizens, and it would almost surely have unpredictable amounts of mayhem occurring in the world because of it. They have already stated in the show that there are criminals operating in the same city as All Might even though they know that he’s around, so knowing that he’s around and not really fearing the threat of him at all would only become worse if they knew he was dead.

All hell would just break loose. So All Might put himself into situations that could compromise this is exceedingly dangerous. Yes, you could argue that in this particular case at the end of the series, he needed to do what he did because it’s not like any of the children could have faced that monstrosity of a black monster, but eventually there might come a time where All Might’s continued existence is of far more important than anything else.

Which would make for an interesting story arc if that’s indeed what ends up happening. At the very least, he needs to scale his hero activities down much further than he already has, at least until Deku can control his powers much better. But we’ll have to see. Now as far as animation goes, it’s Bones. It’s really stellar for what it wants to do and considering that there are only 13 episodes of it, it’s able to do everything quite well.

A lot of the art and designs of the show help to give off that superhero feels, colors especially.

Most of the character designs are also quite detailed, and considering how many of them there are, this was rather impressive. A superhero’s costumes make up a large part of their identity, so it’s nice to know that even with background characters the detail is still there. Sure, all of this is just taken from the manga but still, Bones could have been lazy about it had they wanted to. But I’m glad they weren’t.

And since we are talking about the dub, I did find the response to it rather interesting after my First Reaction went up. There was quite a bit of negative reaction towards it among fans and watchers and I never really understood why, I still don’t. Justin Briner’s performance as Izuku specifically I thought worked out really well.

Sure, having Chris Sabat as All Might was kind of the obvious pick, a little too obvious perhaps, but all in all I rather enjoyed the dub and if it came out at the same time as the sub, that’s still the version I would have been watching all the way through.

I do realize that the Dub vs Sub war is still in effect and sub purists will disagree with me, but hey, you guys enjoy anime you want to and I’ll do the same. My Hero Academia can at times come off as a cliché. It’s a superhero story in an era of pop culture where we just have so many of those already to choose from. But that said, it doesn’t consistently hammer down the same tropes that we’ve seen time and time again, and its story so far has been one that sets things up nicely for the seasons to come.

Though coming up with a verdict is somewhat difficult mostly because I know that when season two comes out, future me will most likely have a different opinion on this first season, then I do now. It’s also hard to decide whether to tell people to watch the show or to buy it because I don’t want to say buy it only to regret that later if future seasons aren’t as good. So for the moment, I’m actually going to abstain from a proper rating this time around, that said I do plan on buying the series myself, and that’s not just because I have a moral obligation to since I reviewed the show Like I do with everything I review.

And assuming that future seasons will be the same quality both narratively and otherwise, later on, then this series will be an easy buy, but until I know that I don’t think it’s fair to award it officially as such just yet. My rating system probably needs to be updated again and changed to account for this sort of thing in the future, as I actually think it’s going to be a more frequent problem, but until then this is what I’m going to do.

At the time of this article, My Hero Academia has been licensed and is available from Funimation Entertainment with what I assume to be a home video release forthcoming, and they also have the show for legal streaming in both sub and dub on their website, if you happen to have access to it.