Gyokko is a member of the moon demon above the fifth rank and is one of the demons who play a role in art. The swordsman village, together with Hantengu ( 半 ( はん ) 天 ( てん ) 狗 ( ぐ ) compared to the demon members, the moon over the other Gyokko, has a very strange body shape. How is he looks like he has? No arms and part of his body are seen growing in a Gyokko pot, has several hands like babies around back and has two green mouths that are in its eyes, while the eyes Gyokko's Demon Slayer original is actually on his forehead and mouth Gyokko's character has a soul highly Narcissistic, where he will always praise his own art and would be angry if someone made fun of his artistic quality, Just like the moon demon on the second, namely Doma Gyokko, is very brutal in killing its victims, like, as he casually Merged several swordsmith bodies and call It a very beautiful work of art, Hi Gyokko's extreme actions are also more visible when it is known the fact that some of the sword passengers seem to be alive when combined each other. So in this review, we will discuss one of the members of the fifth-ranked demon of the moon, namely.

Gyokko's story begins 200 years ago how he was born as a human. The one named manage in his human life Gyokko Kimetsu no Yaiba was born into a family who is very poor and lives in a fishing village. He lost his parents When he was a teenager. How were his parents known to have drowned and were found after days with a badly damaged body condition, but manage Or Gyokko is actually fascinated by the state of his parents' bodies and from This is where Gyokko was inspired to start making art when he was growing Up manage has an interest in art that strange where he would torture and kill and skin animals for making his art because of his eccentric behavior and is considered to be tormenting. 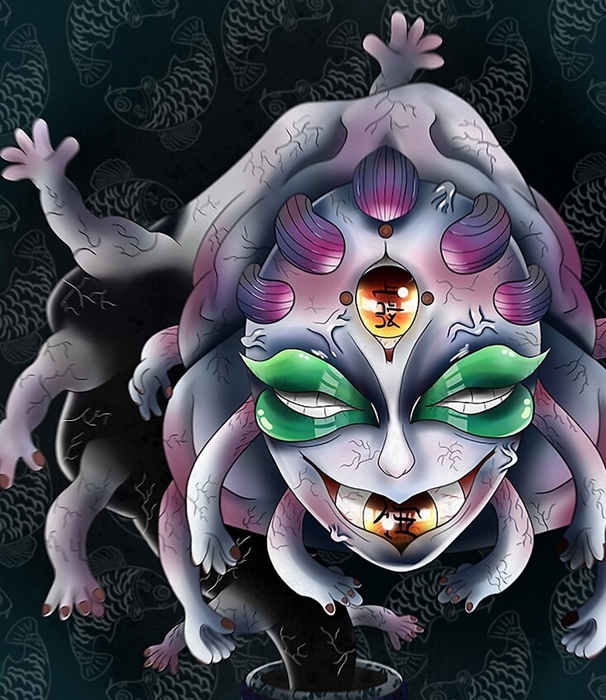 The villagers' animals then started to give him and also kicked out manage from The village where Ki is angry and wants revenge. Revenge in the end killed one of the residents' children in his village who made he was arrested and then punished. The villagers then punished the manager sadistically where he was hanged and then his eyes gouged out thus making manage blind forever. Muzan, who heard the news about management's, ugliness, actually made him attracted to him and approached manage who was dying. Then Muzan gave his blood to save, manage Since then manage turned into a demon and changed his name to Gyokko, and not long after He was made a member of the moon demon above the fifth rank.

The interesting thing is that Muzan himself is very interested in Gyokko's artwork and found out when Muzan disguised himself as Muzan humans sold several pots of Gyokko for a high price so that they could earn money. Hai Gyokko first appeared on upper moon demon meeting after the defeat of q-taro and climb by the party demon hunter. He is seen greeting Akaza and also Doma. Where then, Doma praised Gyokko's work and said that the pot he gave was used for prayer, save the human skull hear the words of the Gyokko domain instead feel happy and think that Doma's actions can inspire him to create a new work shortly after Muzan expressed his Anger on the death of q-taro and dake Gyokko then ordered to destroy the Sword. Forging Village together with Hantengu after arriving In cross-sectional village Gyokko's sword is seen eating one of the passengers who saw it and then Kyoko vomited it back because of people.

It'S not good to eat this. He said that destroying the Village sword. Smithing is one of the best ways to weaken demon hunter power. When Muichiro Tokito and the two villagers came to the warehouse to look for a new sword, Gyokko suddenly appeared and attacked them. Gyokko then introduced himself and offered tokito to see his beautiful artwork. 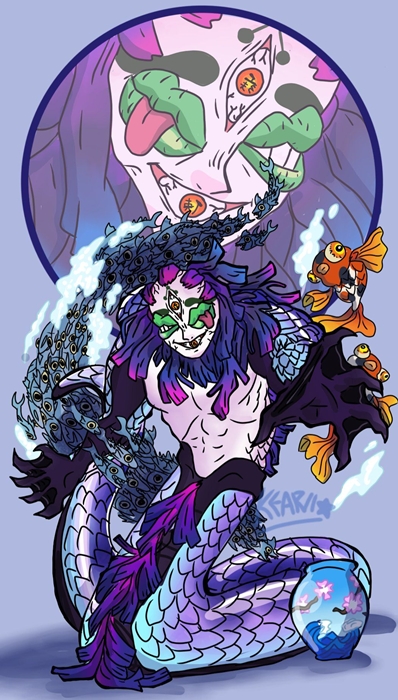 It turned out to be the bodies of some passengers. Stitched up by Gyokko use their swords shortly after Gyokko, then fight against tokito and in the end, he was killed after tokito succeeded. Let out the demon hunter mark and his strongest breathing technique. Hey, power as a moon demon top fifth rank Gyokko is a demon with several unique powers and techniques in the form of fish that can be removed from the port. These fish have a certain type and power that Kyoko uses to fight Hashirama and the demon hunter army.

Gyokko also has a technique unique as seen when he fought the pillar of fog that was michiro tokito, where, in that fight, Gyokko almost killed tokito when trapping him in a lump of water, Gyokko also has great physical abilities. Strong speed and extraordinary reflexes are shown by Gyokko when he with easy to dodge tokito's mist attack in his last transformation, Gyokko able to molt and make the scales so hard like diamonds, thus increasing his physical defense, Hi, Gio, cabbage's, stamina and endurance are proven to be Limitless this can be done seen when he doesn't look tired at all when fighting against tokito and repeatedly withstand his attacks. Like a member of the moon demon above others, Gyokko has an extraordinary body regeneration ability where he quickly regrows parts of his body even after being cut down by nichirin sword demon slayer. One of Gyokko's main abilities is the pot dan. He is able to bring out the pots wherever his heart desires and can teleport freely from one pot to another instantly.

Gyokko'S attack in the form of small fish is removed from his port. Besides that, he can also summon an octopus and attack the sea creature, Gyokko uses to attack and eat humans to increase inner strength. Hai Gyokko fight can create and manipulate water to trap his opponents and strangle them to death or using the water as a medium so that the demon fish can move with ease in an emergency. Gyokko can molt to change. His appearance became much stronger.

How his body was covered in scales, transparent? That is harder than the diamond that comes from inside the pot. According to himself, only three people have ever seen Gyokko in shape. This change and the third person in question is tokito in the form of Gyokko's. Final transformation.

Has the power to change everything he does touch with his fists become small fish creatures, Gyokkowi's physical abilities, the ability will also increase to become stronger and more deadly. Even he is able to move with subsonic speed on this change, as well as the story judge of the period then Gyokko as a human is not explained at the time of his death. So The creator of this anime then wrote it in the Kimetsu no Yaiba. Suddenly Hai, So that's the discussion about the devil the fifth month, namely Gyokko.