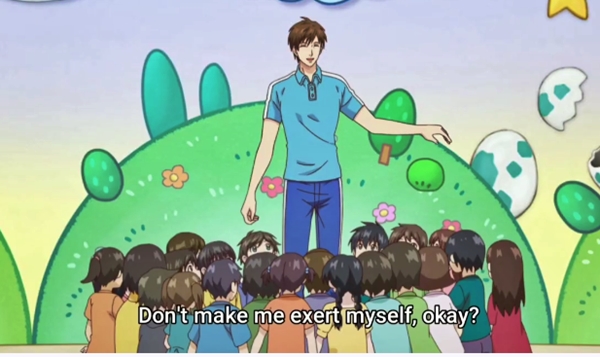 Actually. This might be the last one in terms of popularity that I found most entertaining for this season and that's going by the synopsis. By the way, I can't figure out why it's so down low, like basically what it's supposed to be. Is this dude who hates his life works as the host of a kid's show with like two other people, and he does these life lessons on the kid's show, but I guess they're shrouded by a little bit more of the fact that he Hates his life as I think, that's supposed to be what it is, which I think is hilarious and I would love to see it be exactly like that where, like his life, is a very big part of it, but also maybe the two people That are our hosts with him as like a singer and like a dancer, maybe or two singers. I don't know as a few their lives, but mostly Uramichi Oniisan's life and then, of course, the kids show that he's putting on where he's talking about.

One of the lessons and he's like I don't know man, you're gonna want to, kill yourself every day of work because yeah dude yeah, that's, that's accurate, as hell man anyways enough with the talking enough with The intro stuff, let's go check out the first episode, don't make me this man said: don't make me he's literally the ex the exercise. Guy right, he said, don't make me, exert myself, that's funny, it's just from all the hard-drinking adorable, absolutely adorable. Oh my god. Oh, my God, don't be weird: oh man, no dude, no stop dude job. One thing: sucks, dude he's so right. 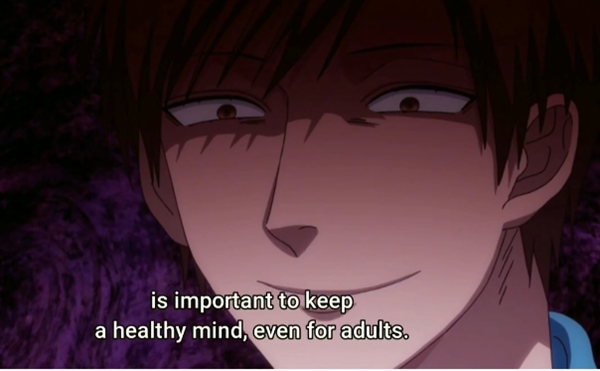 Somebody'S gonna have to have a talk with this guy amen. Damn its true dude. This is a kid's show, though, he's gonna be like. Is it because of your hard-drinking? Oh yeah, dude? Oh, he's a gymnast. Oh, that's cool he's emotionally unstable the will to live my spirit. Basically, oh man dude, they look so adorable. My man gonna show up. You said drinking party wait hold up drinking party.

Oh, are we getting a little bit of like the real hymn now? Well, I mean we get a little bit of the real him on the show, but I mean like his life outside of the show. That'S me every morning, did you stop fighting jackass? This isn't where you should laugh. Oh, my god, I was just describing myself I'm crushed every day,

I just want to be funny.  so usual is the bunny right because he's pink and there are bunny rabbits in the background: okay, okay, okay! So this is the kohai he's always broke and his idea of saving is putting money in a piggy bank. We can tell that your life is not going the best he's going to say the thing that he said a hundred times he's a type who doesn't make use of his broader perspective at all. I want to be funny and popular with girls. 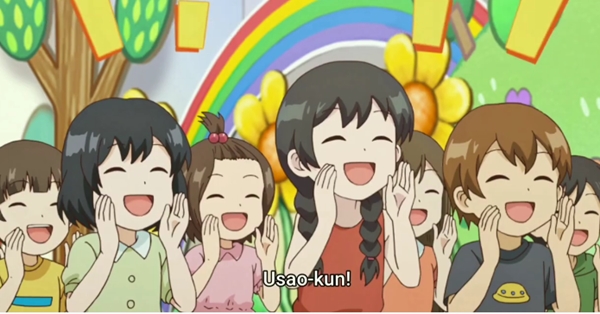 That'S funny. I'm loving this show so far. It'S pretty, funny. Oh, they hate their lives too he's a singer Uramichi Oniisan. He wants to be a musical actor, a very talented singer with a strong, deep, and pretty voice. Oh, I want to hear him sing a b. He loves, crass, dirty humor and can't read between the lines or sense the mood, even though he's like a pretty boy. I think that's what they said. The first part. It reminds me of somebody.

I know somebody really bad at that. Her unique experience after graduating from a famous music college includes being a pop star. Oh cool wow. Oh damn, she's done a lot. Wait, um, a jazz singer in a nightclub. Now, not a singer as well as a pop star and an enco singer. What is the enco singer? She scrolls through it, sees her friends getting married. She hates her life. Don'T look around!

Oh, why'd! You turn around dude, never give up the fighting man! Interesting! Oh damn, he really hates life. Now he doesn't even get mad anymore he's just like doesn't even care Richard Feynman. What the hell is that is actually laughing. It'S, funny dude. Oh my god. I love this guy. Dude yo I'm loving this anime dude. 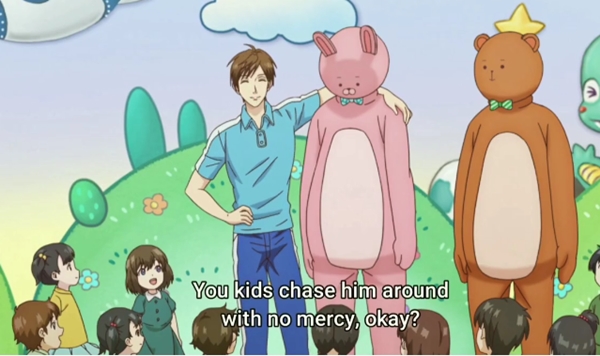 This episode feels like it's so long. The exhaustion is eaten away in his mind, this man's going to draw a bottle the that's the creepy thing we saw earlier. You know he's creepy as a dude - oh, oh, my god, dude he's scared of the creature that appears in his dreams. If I admit that I'm sick, a guy like him with dangerous eyes would use that to take advantage of me. The creepy person in his dreams, dude - are we gonna, see it his dream, maybe in a future episode, maybe not this one.

This one's gotta be almost over indifference turned into anger. What did he do to him all right? That was actually a pretty good first episode. I am really interested in this series going forward, man. This is definitely going to be okay, maybe not definitely, but it could very well be the best comedy of summer 2021.

Just from this first episode, a lot of it is just I don't know. I just feel like it's my type of humor, the fact that it's about this dude who hates his life and reflects on the fact that there are so many things he dislikes about what he has to do and what it means to be an adult And everything that he goes through, he reflects on that stuff to kids, because the kids will ask you a question and they don't realize sometimes how much it stings and so he's reflecting and they'll ask him something about. I don't know life or like oh, why aren't you feeling good today or what happened to this and, like I don't know man it's just. This is really funny hearing the one. The dude laughs absolutely. 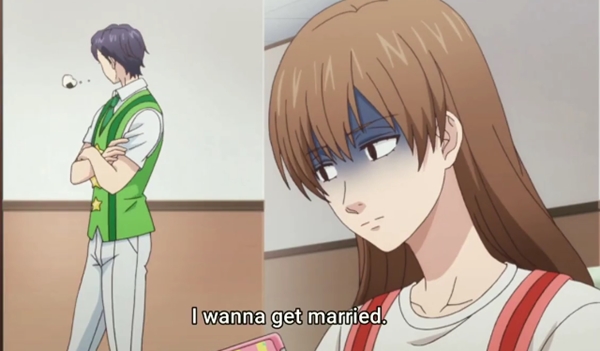 That was a great laugh man that that actually probably sounded like the most realistic laugh that I have heard in an anime. I want to see more about the best friend or what not best friend but his friend and his dreams. I want to see more about that because it's so creepy dude, it's such a creepy character and we saw it in the op too. We saw it. It was like on the loaf of bread and floating around dude.

That was a great man. This is such an interesting show. I wanna I want to know more about every single one of the characters. We got a little glimpse at our main character, and then we had tiny little tidbits for the four people around him. The four people around him would be the two in costumes and then the two singers, but there's still so much more to explore with every single one of those characters as well as other people like. 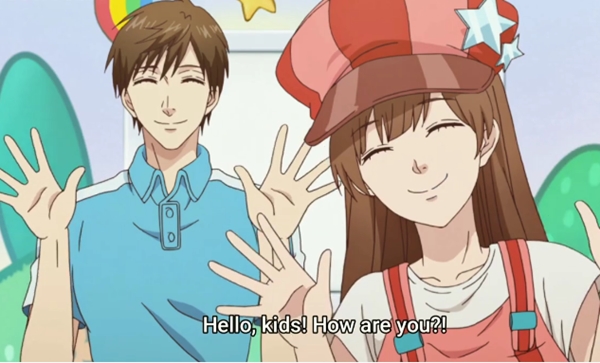 I mean it seems like there's like you know, the three of them are the hosts. You got Uramichi Oniisan Ep 1 the exercise guy and then the two singers probably doing the songs, and I think the three of them are the hosts. But I think Uramichi Oniisan is probably like the main host, but the way that he responds is really great to the kid's questions. So essentially, what this whole episode was is recordings for this show it just seems like such a great show, so I want to know more about the different characters. As I said, I want to see more from that friend in his dreams.

He said appears in 80 of his dreams. I'm sure we're gonna get some dream moments at some point in time. I want to see more of him outside of the show as well. We saw a little bit some glimpses of him and his life outside man smoke cigarettes. I think that he was referring to himself when he said a single man drinking alone, watching dramas.

Probably him, though I will admit one thing that was kind of annoying. Was he constantly going to that? They constantly went to the one frame of the straight face and, as you know, you know I'm talking about like where it's like a purple background at the lines on his face. use it less frequently because over time, it'll just become an overused joke and then it won't be as funny anymore. So hopefully they don't use it as much as they did this time. 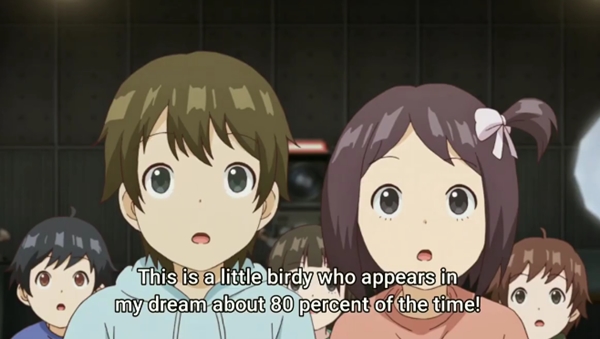 But honestly, he's kind of given some real advice to these kids. Talking about job hunting, talking about when, when you grow up and you cry no one's like no one's gonna, be there to help you not cry: okay,, you better, you better! Take it! You better hold in those damn tears, cause being an adult, is, sad and it sucks. I love the two people in the costumes and their dynamic with Uramichi Oniisan, especially like he seems, to get along pretty well with the bear, but with the rabbit, the rabbit is always talking a little bit, and so he gives the rabbit a lot, but I think that they have a great dynamic.

I don't know overall. I think this is a pretty funny show and I'm definitely going to be watching the second episode so from here. I want to know what you thought of this episode. What moment did you laugh the most at I mean there was, I just was laughing throughout man. It was great, but I want to know what moment you laugh the most at is there more that you want to see from any one of those five characters.

Do you want to see more from Uramichi Oniisan one of the two in the costumes? One of the two hosts is the one that you like the most so far yeah just what do you think of the show and as always, if you enjoyed the video, then like the video and subscribe to the channel with notifications on so you don't miss another One I do anime Uramichi Oniisan Episode 1.