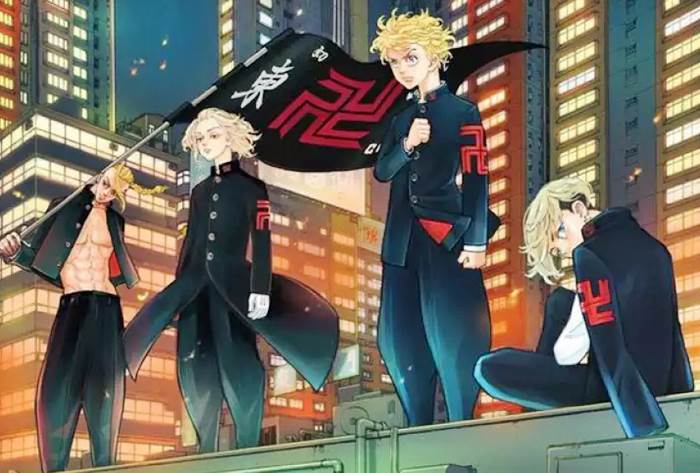 We are shown that Kazutora is finally beginning to accept all responsibility for what he has done. To the extent that he thought that a sentence of 10 years in prison was too light for his guilt. Mikey also sent a message that he had forgiven Kazutora. Even Mikey will forever consider Kazutora as part of Toman.

How does the story go? Let's just discuss the storyline of the Tokyo Ravens episode this time.

The Story of Chifuyu's First Meeting with Baji The previous episode showed Chifuyu's past while attending junior high school. It looks like Chifuyu is being talked about by another child because he just entered first. He was immediately summoned to the teacher's room, it happened because Chifuyu had beaten the child from another class. Chifuyu stepped on her upperclassman while saying "with anyone I will not speak politely, for I am the ruler of this place". Chifuyu's friends who walked into the school were told that Chifuyu was very cool. Even a senior was made to not stand up against him.

They were convinced that Chifuyu might be able to rule all of Tokyo. But Chifuyu said that he didn't care about it. Because he realized that his seniors were just weak people and didn't care about them. Chifuyu who was in the classroom was called by his friend because he wanted to let him know that there was a third-grader who was not approved this year. He thought it was possible that the boy was very strong for Chifuyu. 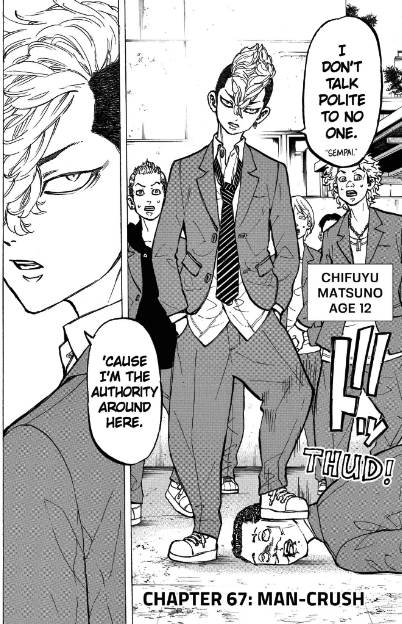 It didn't take long for Chifuyu to stand up and say he was going to beat the third grader. Before the boy thought he was the ruler here, Chifuyu immediately looked for the boy in his class. But how surprised Chifuyu turned out that the boy looked like a nerdy child by wearing glasses with simple hair. Chipuyu who saw the child began to wonder why the child who looked smart could not be approved?

While Chifuyu's friends started betting and second-guessing it was possible that the person was often ditching because he kept being bullied. Or he's a closed person maybe even because that person is too smart. Chifuyu then decides to enter the classroom and intends to find out the person immediately. The innocent guy who saw Chifuyu sitting in front of him immediately asked the name of the person in front of him. Chifuyu who saw that person looked stupid in writing. He then asked why people who are not smart in writing dress like that? Then the man seriously said that he did not want to be approved because he did not want to make his mother cry. Chifuyu who heard that directly taught him and that person looked very happy. Then the boy said that Chifuyu turned out to be a good person. A curious Chifuyu tries to figure out what's being written his senior. It turned out that the man was writing a letter. Chifuyu immediately interrupted him by saying that he was a strange person. It makes the person feel ashamed. But Chifuyu taught him again after school. Chifuyu was walking with his friends. It seemed that his friends were still laughing at the man. But Chifuyu said that he was curious about that person. 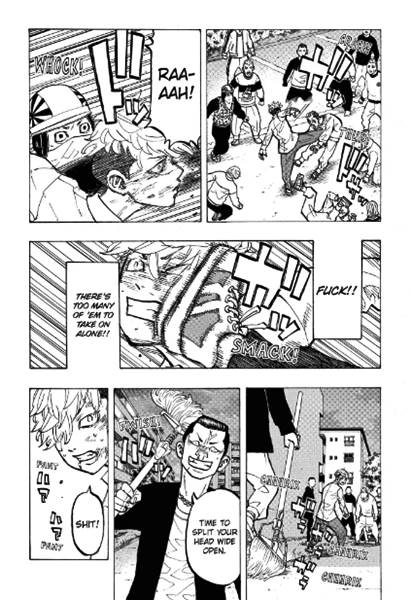 It wasn't long before they separated, to go home. But suddenly Chifuyu is confronted by several motorcycle gangs. One of them said that they were going to beat Chifuyu because they had beaten one of his men. The gang leader then brought his face closer to Chifuyu saying, "I'll teach you how to be proper manners" but suddenly Chifuyu immediately hit the man in the face using his head. With a mock foolish expression, Chifuyu said "Oops Sorry I was going to look down but your head blocked me".

Chifuyu immediately opened his uniform and made fun of them. In the fight, Chifuyu looks overwhelmed for fighting them all alone. Then one of the men took a broomstick to hit Chifuyu. But suddenly appeared the 3rd grader who looked weak earlier while saying "Attacking mass against one person and using a weapon?" they heard the taunt of the person immediately look annoyed. Chifuyu looks shocked to see the weak child there, in a state of threat the weak child said that he was grateful that his letter had been sent. Then as a thank, you, Why not let me join?" Chifuyu who looked worried then said, "You're stupid, this is not your place" then suddenly the weak boy immediately beat the boss of the motorcycle gang. He beat her with just one hit. Then the weak boy immediately opened his glasses and hair binder while saying "Captain of the first division of the Tokyo gang Majin Baji Keisuke"

It didn't take long for Baji to beat them all up and beat them all alone. Chifuyu could only be amazed to see all of that. Then Baji approached those who had been battered and said, "If one of our friends is injured we will beat anyone who does that. So remember very well he is my friend. If you mess around again, we'll wipe out all of your gangs. The members of the motorcycle gang could only be silently frightened. Then Beji calls Chifuyu and asks if he's okay. Shortly thereafter Baji invites Chifuyu to stop by his house. To eat noodles that are divided in two. From that day on Baji became the first person to be Chifuyu respect. 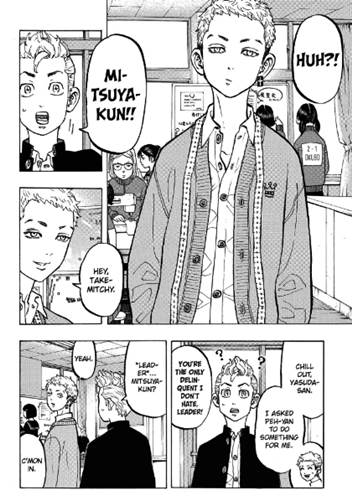 A recent episode of Tokyo Revengers showed Takemichi in front of Mitsuya's school. Then from behind Takemichi is called by someone who turns out to be Peyan. Peyan says that Mitsuya is busy, so he is asked to pick up Takemichi. Then they arrived at one of the clubrooms. Peyan said he couldn't stand the woman who was in there. Then suddenly a woman opened the door and immediately became angry at Peyan. Because Peyan must have intended to interfere with the busyness of his club chairman.

Peyan looks nervous and scared because he was scolded by the woman. Shortly thereafter Mitsuya appeared and went straight to Takemichi. Mitsuya said he deliberately asked Peyan to come here to deliver Takemichi. But the woman said, "Chairman Mitsuya is the only bad guy he doesn't hate. Takemichi looks shocked as Mitsuya becomes the chairman at a sewing club. Mitsuya asks Takemichi to wait first because soon something he made will be done soon.

Takemichi still doesn't seem to expect it, as the Mitsuya he knows is one of the leaders of the Toman gang. Takemichi who was waiting asked why Mitsuya called him here. Then Mitsuya says he's making a uniform for Takemichi. Mitsuya said that this was his way of thanking Takemichi for saving Draken in the fight on August 3. Mitsuya wants to make sure that he's the one who made Takemichi's uniform. After the uniform was finished, Takemichi eagerly tried it and couldn't wait for tomorrow's meeting. 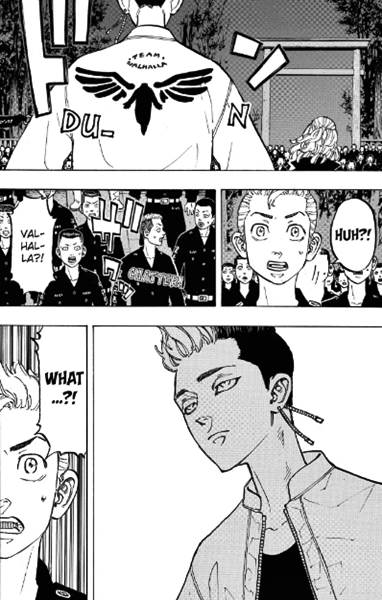 The meeting is about to begin and Draken asks Takemichi to get ready. Moments later Mikey appears who turns out to be followed by Hanma and Chifuyu behind him. Takemichi along with the rest of the squad seemed surprised to see Hanma come along with Mikey and Chifuyu. But suddenly Draken said that this meeting will be a different meeting. Because they're going to end the bloody Halloween battle.

Bloody Halloween battles can be won by toman gangs. Mikey then said that Hanma who is Valhalla's representative has a message regarding his defeat. And began to introduce themselves in front of all the Members of Toman. After that, he explained that during this time Valhalla did not have a leader. Hanma announced that Valhalla would now join the Toman gang.

Then everyone was shocked to hear the announcement from Hanma. They couldn't believe that Toman was getting bigger. All the members started shouting echoing Toman's name. Takemichi, who heard about it, felt something strange. Hanma then says if there is someone connecting Toman and Valhalla, he is Kisaki Tetta. Takemichi, who heard Kisaki Tetta's name, immediately recalled Baji's message saying that Kisaki was the real enemy. Instantly Takemichi realizes that his struggle yesterday will be in vain because Kisaki Tetta will still master Toman with this merger. So Toman will be an evil organization in the future. 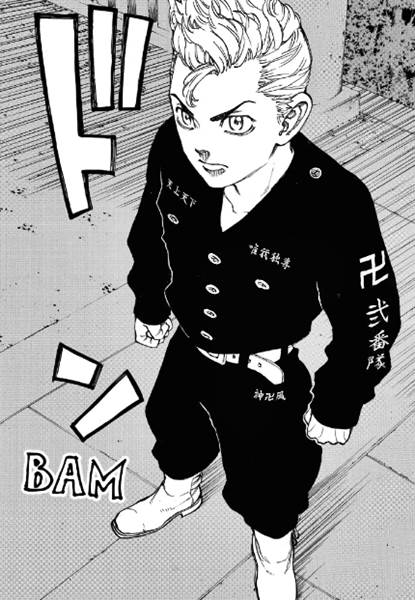 After discussing this Mikey explained there will be one more thing that will be discussed. Although we managed to win the bloody Halloween battle, we also lost one member of the first division Captain. Baji Keisuke died that day, and all of Toman's members were instantly silent realizing the great loss his leader felt. But Mikey remains determined to reimagine the future of the Toman gang that he has made with his friends.

Mikey told Chifuyu to deliver another important announcement there. Chifuyu confesses that he actually wants to leave Toman. But Mikey prevented it because it would make the members of division one lose their spirits. With a glum face, Chifuyu said "leading division one is a big responsibility for me, but I've been talking about this for days with Mikey".

Then suddenly with a loud voice and a stern expression, Chifuyu announced that he would mention the name of the person he was going to follow. And it turns out that the man is Takemichi, Chifuyu appoints him to be the captain of the Toman first division. Takemichi is still confused by the announcement Chifuyu said. But Chifuyu says that Baji must have wanted this because, before his death, Baji left the responsibility to Takemichi.

Then by shouting Mikey called Takemichi, he had Takemichi raise his head and give a response to Chifuyu's announcement. Then suddenly Takemichi recalls all the words of his friends in the future from Naoto. Even Baji with tears that continue to flow he said that he could still change Toman.

Then by raising Takemichi's head shouted if he was willing to become captain of the Toman first division. Mitsuya smiled at Takemichi's reply, as did Mikey who said Takemichi was a little too high raising his head. Then the chapter ended.

In this episode, we explain Chifuyu's past when he first met Baji. So we understand how bad Chifuyu feels when we realize that Baji is gone for good. In addition, it turns out that Kisaki is indeed a very dangerous enemy even though Takemichi managed to save Kazutora. He was still able to combine Valhalla with Toman. Although Takemichi also has the opportunity to change Toman, because he eventually becomes the captain of the first division.

Staying forward to Tokyo Revengers in the next chapter, only on animeposte.com