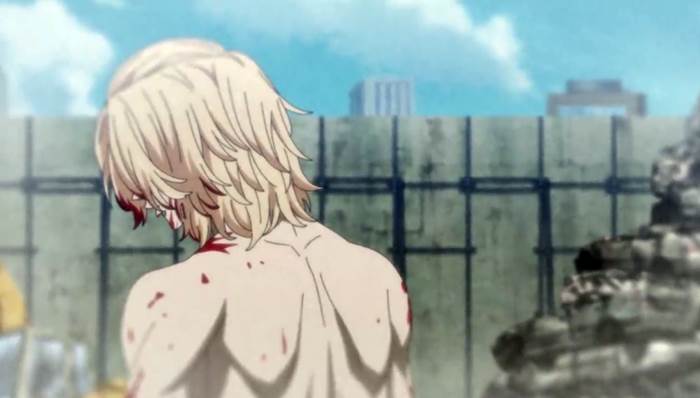 In the previous Tokyo Revengers Episode 17. We saw the power of Mike, who only blamed Kazutora with just one kick that made Kazutora's hands close together, ah and immediately fell unconscious. Looking like, he was already weak due to the cunning fight done by Kazutora, the previous race reward members who saw the mic now couldn't move anymore, started to think that this was their chance to kill Mikey seen a sly smile Harma said that Kazutora had succeeded. Then one of the Valhalla executives started to come forward, bringing his men to attack Mikey grandpa thought to see one of the Valhalla executives, starting to feel that he had seen Mitsuya Draken before and the technique that saw the reward members running towards thinking immediately fought to block.

Who was about to hit Miki just screamed thinking. It was all over Hi, But apparently, ki's story came and hit the executive straight away, who saw Kisaki Tetta. Protecting Mikey could only look shocked then saw Kisaki Tetta who was like a hero while stepping on the chief executive. It looks like the story is still in style, saying I am the leader of Squad 3 Toman, the story as strong as I will be in charge of guarding the general's foot mic. Who saw the story immediately remembered that the executive wearing a mask? Who was beaten by Kisaki Tetta was one of Mrs 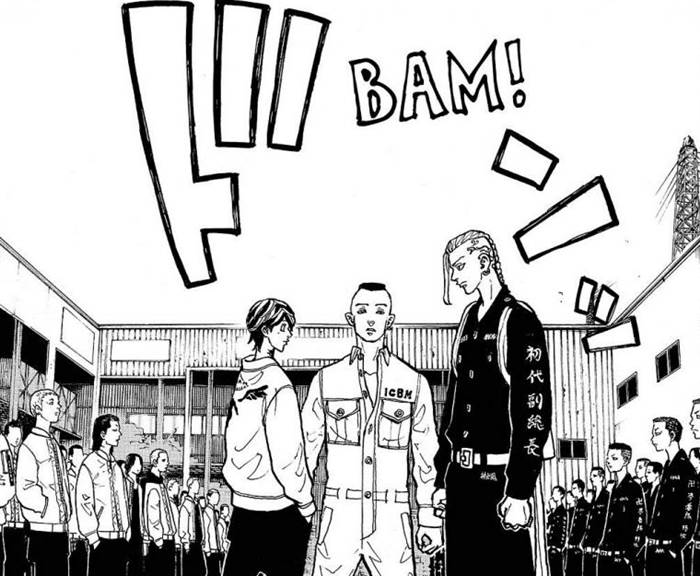 He himself remembered when he first met Kisaki Tetta. All the Toman members who saw Kisaki Tetta started to look happy with what he was doing and began to worship. Muji, Kisaki Tetta Hai, but not Takemichi, together with Chifuyu, were still suspicious of Kisaki Tetta's actions but didn't think so. Finally, started to realize this fight was designed by Kisaki Tetta so that he can gain a position of trust in Toman after he pretended to save Mikey cake. Mikey who saw Draken praising Kisaki Tetta could only watch while saying in his heart. You are wrong. Draken Toman Mike and you are in trouble because of him but arrived -suddenly from behind Kisaki Tetta Baji appeared, who immediately jumped up and immediately hit Kisaki Tetta. Suddenly, all members of Toman and Hanma were shocked to see Baji's appearance and immediately beat Kisaki Tetta for the reward. The member who didn't know the plan from Kisaki Tetta immediately cheered praising Baji, who smiled said he was going to hit Kisaki Tetta until his mother didn't recognize Kila's face

Baji immediately realized that from the beginning he had intended to target Kisaki Tetta, but Drake Nda Mitsuya, who still didn't know about Kisaki Tetta, could only scream telling Baji to stop Baji, who was watching In the direction of his movement. Mitsuya was suddenly thrown from behind. By one of Kisaki Tetta's subordinates, who, at that time immediately tried to stand up again, saying that there was a fly flying nearby and immediately invited his men to destroy Baji without emission who saw Baji would start fighting directly without worried because in the future he even Got news that Baji died in this battle, but Chifuyu came and immediately stopped Baji saying if Baji killed Karang stories, then he would be seen betraying Nikkei and told him to beat Kisaki Tetta at the right time later, But the clothes hit Chifuyu and meme. He asked not to stop him, but Chifuyu still wouldn't listen and said that he was the deputy head of the 1st Squad and he came to protect Baji and said he wouldn't be kidding if Baji kept running from this place. 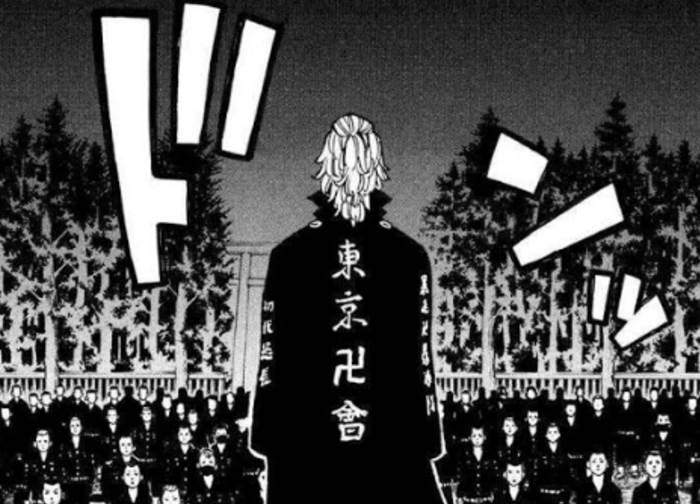 But those who heard it said that he will give Chifuyu clothes for 10 seconds who continue to count saying that his presence will not stop unless Chifuyu kills him Chifuyu hears the words of Baji immediately, looks shocked, and doesn't know what to do. Then those who have reached the count immediately try to hit Chifuyu but Michi's grandfather came and immediately restrained, Baji grandfather mission, who, while holding Baji immediately said to Chifuyu that they could stop Baji together but Chifuyu, who, while shedding tears, said I can't Miki grandfather. I can't hit Baji the mic. The stem looks shocked by Chifuyu's words. Baji was immediately hit on the back of his neck by Baji, which instantly made ATakemichi feel like he was going to faint but Takemichi, who was about to faint, immediately remembered that and Hinata's face when he was dead in the future, which instantly made a Takemichi immediately. Try harder to take

Strong saying he will stop Baji with all his strength. If he doesn't stop Baji, then Kisaki Tetta will kill Baji and say I will protect you, Even though I only did it alone, but using the mic while holding Baji down. I started remembering Drake's words in the future that the one who killed Baji wasn't Kisaki Tetta, but the shoes don't take. The mic, who saw Kazutora behind Baji, was immediately shocked by what the shoes were doing, and then Takemichi without further ado, immediately pushed Aura's case with his body so that he immediately threw Soetoro using the mic. He was worried about Baji's safety and immediately asked how he was, but Baji didn't look hurt at all once and still standing and saying that he only got a little scratch on the technique. Baji saw and heard it was okay immediately looked relieved to be able to save him, but Baji said that he would still kill Kisaki Tetta and asked not Takemichi to remain silent and just watch Hai Michi's feet. Look still don't really understand. What'S going on because now Mikey shouldn't have a reason if he kills the shoes later. 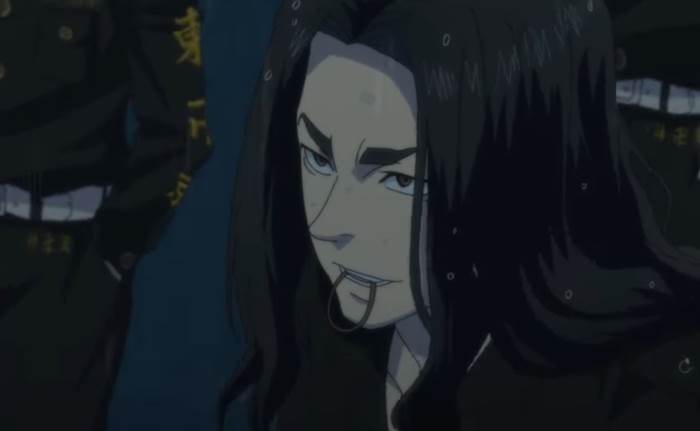 Because now Baji is safe, not even Takemichi seems confused about what to do then Takemichi finds the answer. Are men destroy the roots, namely destroying the stories of oneself so that he becomes the chairman of Toman so that he can change all previous futures? For those who already know that Takemichi q & q quail is also after Kisaki Tetta, immediately smiles and immediately beats the two of them who want to join in the killing. Kisaki Tetta Baji says not to stop him, but Miki. I Didn'T ask why Shouldn't Halo Baji no longer needs to fight alone, but those who saw ATakemichi while going away said, please take care of Mikey Takashi Mitsuya with Chifuyu. Uh could only be silent with Baji's decision, but before reaching Kisaki Tetta's place, he had to be able to pass as strong as the three subordinates from the stories that as many as 50 members were seen for those who tied up their hair while preparing to fight them. Saying this was perfect, unapologetically seeing the baby going up against all the members of the third squad started to doubt, because, according to him, no matter how strong Baji he could possibly be against 50 people alone. But how surprised it was that Ki saw Baji who beat several people very quickly, then saw Kisaki Tetta.

Who was on the phone with someone saying that Kazutora had failed Kisaki Tetta, who looked annoyed told his deputy Baji would already come? If I saw you relax just like before, then you will die vice-captain who heard ki's story said that immediately apologized to him, then ki's story said not to underestimate the power of Baji because Baji was the only person who could attack him. But his deputy said that Baji couldn't possibly escape against 50 members without being killed, But it turns out that for already standing right in front of Kisaki Tetta while pointing a gun to his neck, Kisaki Tetta, who saw Baji was already in front of him. Immediately looked at his deputy, it turned out that the deputy who was just talking directly was already unconscious. The story looked at the direction of sharing again to immediately checkmate Kisaki Tetta. The story that can't do anything seeing Baji immediately said if you have something that needs to be done quickly, do it, but it turns out how shocked Takemichi, together with Chifuyu, saw Baji bleeding from his mouth. While saying, I think this is my limit and Baji too fell down by continuously bleeding from his mouth Takemichi, who saw the clothes immediately confused? Why did you fall immediately when Only one step left to beat Kisaki Tetta Chifuyu, who saw Baji immediately approached Kisaki Tetta and asked what Kisaki Tetta had done to Baji? But Kim's story said he didn't do anything Chifuyu who checked Baji's condition immediately found a stab mark on his back 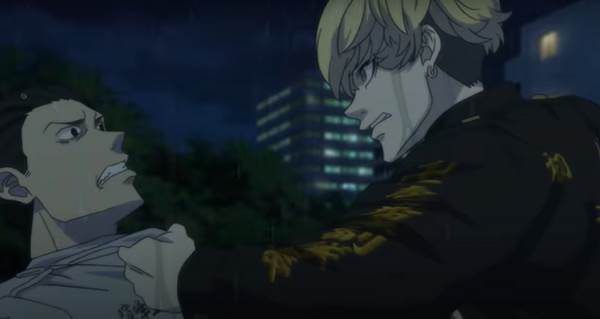 Grandpa, who heard Chifuyu immediately remembered the incident where Kazutora had stabbed Baji before Chifuyu, who saw Suzuki To's mark, was immediately angry and went straight to cash. Ut didn't give up who was starting without worrying, suddenly Kisaki Tetta with the intention of fueling, the situation said as expected: Kazutora people are really bad guys Hi. I now understand the real intention of recruiting Baji so that he can kill Baji. When he's careless like this, using a mic that hears Kisaki Tetta's, words can only continue to look while wondering lies. What is this person saying then, while looking at the mic, that has woken up says? Isn'T that so the leader of the take mic, who saw thinking woke up very angry, began to realize that this was Kisaki Tetta's plan, which was to cause Mikey to kill Kazutora with the excuse of shoes. People killed Baji thinking very angrily while walking towards Kazutora said I will kill you. I should have done that when you got out of prison, but the person who persuaded me not only was baji said. Kazutora only wanted to make you happy, so he couldn't hide up with what he's done for killing your brother and now. The only thing he can do is say you are his enemy in order to convince himself: Hey, it's! Okay, to see Mikey starting to look scared because of the mic being in a rage but not making any expressions. -What then thought past Draken said Draken. This battle is over, but Hanma who heard thinking said that immediately approached thinking by saying Hah wait a minute. This fight isn't over yet a bike. Aren'T you taking us too lightly? This is not something you can decide on your own, but think with an expressionless face immediately, kicked Hanma, saying it's over Aur, Hey reward members who saw Nike defeating pests so easily. They ran away while scared and Tokyo Revengers Episode 18 ended. Tokyo Revengers Episode 18 is scheduled to release on 6th August.