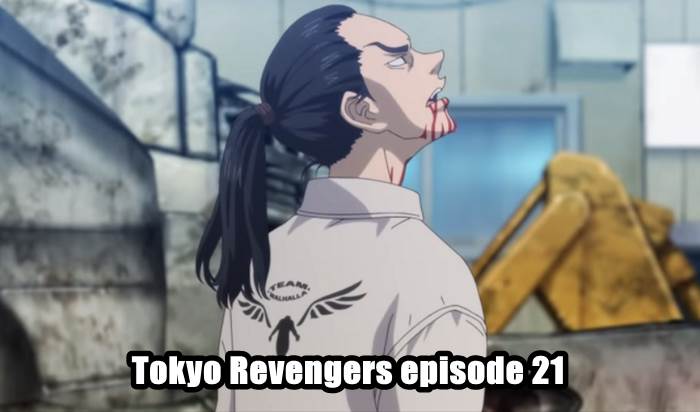 Tokyo Revengers episode 21. This time I gave a title with the name: Baji crying suddenly bleeding from his mouth and he fell. Takemichi is confused and asks in his heart, Why was Baji killed? Baji only needs one crushing blow to be able to defeat Kisaki Tetta. While Chifuyu immediately ran to or shouted at him Arriving. Upon his location, Chifuyu immediately misled Kisaki. He said, Kisaki what are you doing? 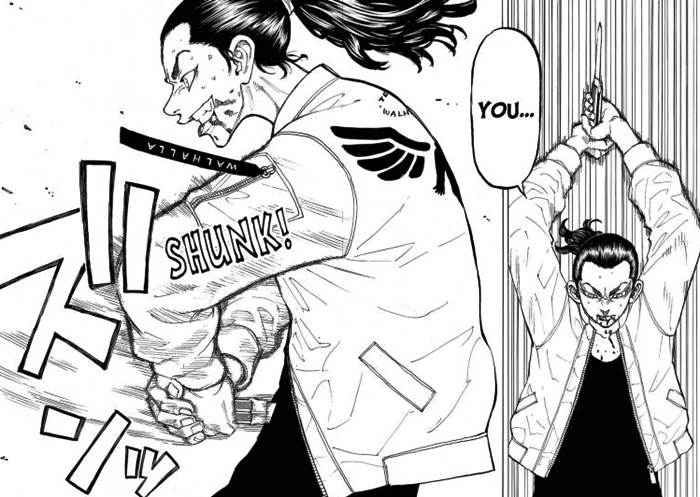 Which is quite far away, so Chifuyu can't clearly see what's really going on with them, they can answer It's not like you saw. I didn't do anything regardless of the words of Kisaki. Chifuyu immediately looked around Baji worried he continued. He was surprised when he saw Baji's hips. There was a puddle, Tired blood yep. He then said blood was stabbed when Takemichi heard Chifuyu's words from a distance.

They were immediately shocked that they immediately recalled the incident Where the court suture stabbed salary from behind by looking at Baji's current condition. They both finally realized that the Baji was just pretending to be strong By saying that the scratch was only a little, even though the wound was a very serious wound.

Now, because the clothes that hurt the clothes are shoes now Chifuyu is very angry from the top of the car pile he shouted down. Takemichi is starting to panic, he is reminded of Draken's story from the future of long after that, but hear Kisaki Tetta is starting to mumble to himself. He can be said to be like this. As expected, fertility is different.

It'S evil I now understand, what's actually behind the recruitment of Squirrels, so that he can kill him when he is wearing sleeves. Like this, The one who tried to lie to Making just woke up saying Kazutora was a bad person who deliberately recruited Baji. So he could kill him when he was careless, even though Kazutora didn't recruit Baji, but his own clothes wanted to enter Valhalla. 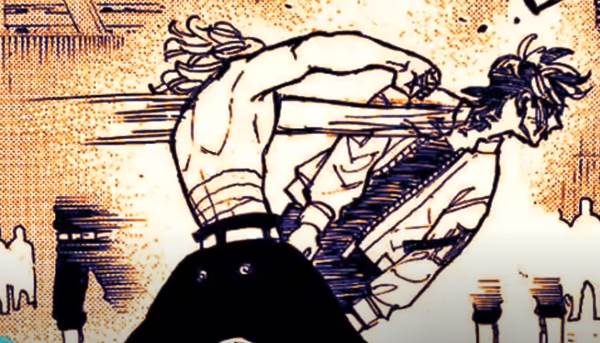 Wanted to tell Mikey but couldn't because there was a Kisaki. Mikey was angry too finally Said as he started walking he I wanted to kill you. I thought I should have killed you as soon as you left.

Mikey said I should have killed you as soon as you got out of the prison. The person who persuaded me not to do it was baji. Kazutora only wants to make you happy, so he can't live with what he has done, even though he kills your brother. The only thing you can do is announce that you are the enemy in order to convince yourself. Baji says it's an to come down from above while licking the blood around his lips, even though he is very angry because his best friend as a child was killed by someone who had killed him.

He defended, but Mikey's face expressed nothing Too I take this lightly. This is not something you decide, not lazy. Suddenly, Mikey swings his foot right at Hanma's head and just one kick from the pest is immediately helpless. Oh look now it's over said Mikey, Mikey is really serious because Hanma just left him while walking in The direction of Kazutora and the Valhalla troops, who saw what just happened immediately panicked right, "Hanma San, it's impossible to cheat every time. Hanma is defeated with just one kick". This must be some kind of trick and their faces are all panicked because they don't want to take risks.

So, in the end, they run away, they will kill us everything is like that. Well now they are face to face with the shoes of the people in front of Mikey above the North, starting to say again, everyone is betraying others Come on Mikey, you will die or I will, without thinking, be hit by the head of fertility outside Kazutor falls And Mikey starts to approach again while saying: u only have the ability to damage important things. So here now I will destroy you myself. 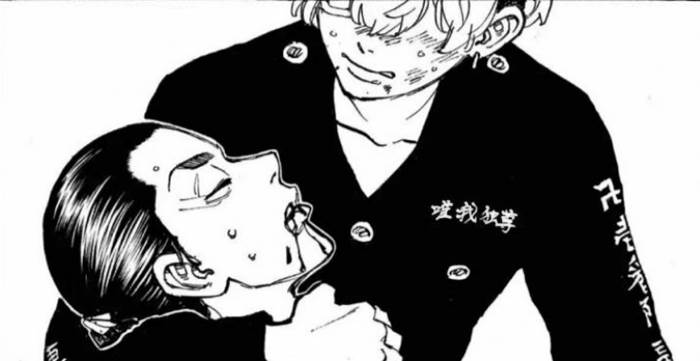 Then kick him again head Kazutora he was thrown and lay on the ground. Then Mikey walked up to him, pressed him from above, and started hitting the sutures on the other side. Chifuyu still worried for him saying why the ambulance before arriving had to give advice. Yes, while Mikey was still in that position, he just kept recovering Silk from the top of the piston fertilizer bench, n Mitsuya and everyone around was just watching, because no one could stop Mikey. Takemichi recalls the words of the future Draken, telling him that Mikey killed Kazutora. And this is the time it happened.

Mikey wants to kill Kazutora, when we are beaten, fertility arrives, -suddenly want at again with the events that have happened to him. First, he remembers the incident where he considered Baji as a traitor and stabbed him. Then he also recalled the previous incident when they killed. His brother Mikey. Kazutora began to remember that Baji was a person who really cared for him.

He realized that Baji was actually trying to help him from Kisaki's grasp. Because after he stabbed Baji, Baji was not angry with Kazutora., but instead continued his intention to kill Kisaki.

Kazutor started crying right at that time. He said that Baji is always by his side. Whatever people say, he regrets it because he has considered Baji as a traitor to kill him. when in fact, for that from the start he had intended to help him. So that people feel that he has destroyed the most important thing for him. Then resignedly shoes people say Baji.

Sorry, I will see you soon in the afterlife now. Suddenly the Baji that were already lying helpless stand up again. He calls his name. Mikey Mikey, just don't hear At that time, because their position was far from top to bottom. Then Baji shouted again for the second time that way until blood came out of his mouth because of the loud setting, maybe Baji's partner was surprised to hear that he looked behind him, and then Baji said again to Mikey. Thank you furious, for my sake. While smiling, even though he was made to laugh, he screamed, Don'T move miracles, but even if you ignore. Chifuyu walks towards Mikey's, location and shrivels up without being in a state of blood that is still splattering out of her hips wedge suddenly wedge says, I won't die. A small wound like this won't kill me, even though it's a fatal wound. Yes, but just pretending to see it and then he said: don't worry Kzutora while taking out a knife. He swung the knife in his own rush and shouted. I wouldn't be killed by Kazutora.

People saw This is what everyone who was there was shocked, especially Draken, Mitsuya, Mikey, and Kazutora. themselves were shocked, because the four of them were childhood friends and the founders of the Toman gang, who is now under arrest. So they were all shocked, even Mikey, who had just stopped beating him. 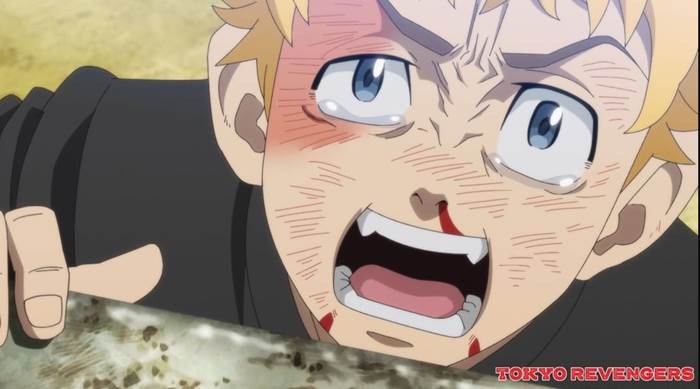 Kazutora was made to gawk again While Chifuyu was always the one who claimed to understand Baji's thoughts, the most he shouted directly at the countryside. So he approached Baji that was lying limply in his arms. While he was about to cry. He also asked why, while on the other hand, he also started to wake up and said Mikey you're going to die.

Next with Baji, you can see that there has been a lot of Kazutora. Yes, how about it, The feeling of Kazutora at that time, was considered obligatory as a traitor until he tried to kill him. When he was angry with him for killing Baji instead, Baji kills himself, Saying that it wasn't Kazutora that killed him, it meant that he did this on purpose.

Kazutora is innocent so Mikey will stop hitting Kazutora, never mind being the one Baji wants to kill, but now Baji is trying to save him. At that time Kazutora was confused? It was as if he had almost lost his sanity. Because Mikey was already angry, so he replied "Shut your mouth I'll beat you to death", Takemichi confused started approaching Baji and asked "Baji Kun why do you do that? I don't understand why you? What the hell are you trying to achieve by stabbing yourself.

Takemichi is asked to approach Baji. And Baji says Kiski is the real enemy. I noticed it when Pah stabbed Osanai. Baji once saw Mikey negotiate with Kisaki. So in negotiations, Kisaki makes an offer to release Pa from custody. But instead, Kisaki wants to be made captain of the third division.

Pahcin, Mitsuya, Draken, Mikey, Kazutora... Crying, Baji said that the founders of Toman were the treasures she had. Baji also said, I want to fix it myself, but I can't afford it. I died by myself, Mikey had no reason to kill Kazutora.

Suddenly Baji imagines Mikey's older brother Shinichiro. Then he said to Takemichi, Takemichi somehow reminded me of Shinichiro Kun. Mikey and Toman, I put them in your hands.

Then Takemichi cries at baji's message. Then Baji smiled and said to Chifuyu, you trust me. Baji remembered about eating noodles together with Chifuyu, then Chifuyu said he would buy little noodles to share with Baji. Chifuyu was silent while crying, Baji smiled then thanked Chifuyu. Then Baji died, Chifuyu immediately shouted sadly.

Furthermore, Mikey in an angry condition directly hit Kazutora. Mikey has not been able to accept Baji's death. Takemichi and Chifuyu learn that Baji has no intention of betraying Toman. From the beginning Baji fought alone, Chifuyu knew this. Chifuyu regrets not being able to help Baji. Takemichi says he's the most useless person.

Takemichi remembers Baji's message, Baji hands Toman over and they are all in Takemichi's hands. Then he ran up to Mikey, he blocked Mikey who was beating Kazutora. Mikey gets angry and tells Takemichi to step aside, but Takemichi still gets in Mikey's way. 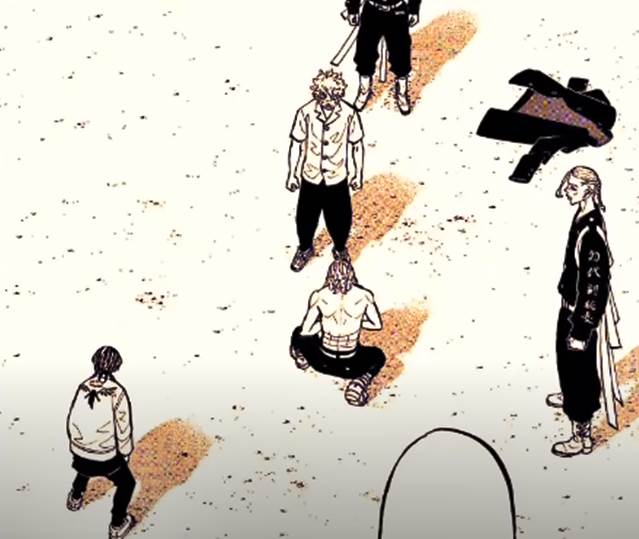 Takemichi scolds Mikey, he says that Baji is dead! Takemichi shows me something to resuscitate Mikey. After takemichi's efforts, Mikey began to regain consciousness. It was the talisman of the founder of the Toman gang.

All the founders of Toman began to gather and see the talisman. Tokyo Revengers episode 21 is over.