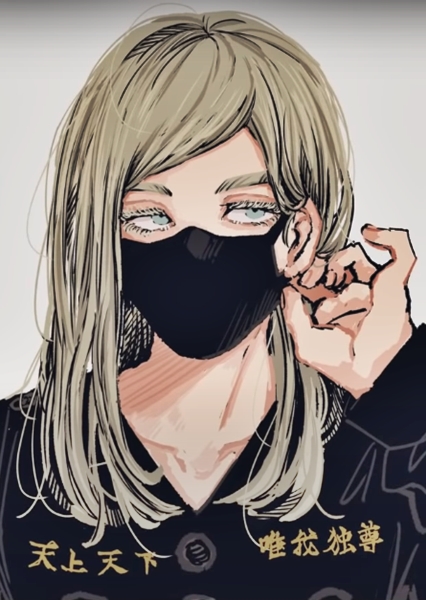 Sanzu was originally vice-captain of Tokyo Manji's 5th division along with Yasuhiro Muto as its captain. Division 5 of the Toman gang is given a special assignment as Toman's disciplinary committee.  The division can do something or judge Toman members without the consent of its leader Mikey. In addition, division 5 is also a spy division tasked with investigating traitors in the gang. After that, everything will be left to Mikey.

At the beginning of his appearance, Haruchiyo Sanzu had a calm demeanor and rarely spoke. He was very loyal to his leader, even as he earned the nickname "a very loyal and loyal mad dog". But behind her calm nature, it turns out that Sanzu is a very strong person and more courageous than others. He would even immediately beat anyone who dared to insult Toman. Even Mikey dubbed Sanzu a "wild horse".

Before entering the Toman gang, Mikey hands Sanzu over to Yasuhiro Muto and the 5th division. Because the other divisions couldn't handle Sanzu. Sanzu is also a drug addict, he is also a manipulative and psychopathic person. This is evident because Sanzu willingly joins mucho betrays Toman and enters the Tenjiku gang. His main goal is to kill Mucho for insulting Toman.

At that moment, Mucho had given Sanzu the option to choose her own path. But Sanzu said, "I'll come with you Captain, this is where I am." But 6 months after the tragedy of Toman versus Tenjiku is better known as the Kanto tragedy. Senzu says the reason wants to kill Mucho is because he betrayed Mikey.

During this time Sanzu only fooled Mucho, whereas before Sanzu already considered Mucho as his brother. But since Sanzu has the principle of "the King's safety is a top priority" Sanzu will not hesitate to kill anyone who betrays Mickey. Even Sanzu enjoys his activities when punishing those who betray his leadership.

Haruchiyo Sanzu is very loyal to Mikey, proving to be that he has no interest in joining the Brahman gang. Brahman is a gang founded by his brother. Sanzu still prefers to go along with Mikey. Sanzu has always been with Mikey, he always obeys all of Mikey's orders. Let's take a look at the manga chapter of Tokyo Revengers chapter 196.  Sanzu is said to be carrying out orders from Mikey to kill traitors.

Hajime Kokonoi, Bonten's executive, is currently one of the top brass in the Kanto Manji gang. As well Akashi Takeomi who is the older brother of Haruchiyo Sanzu, becomes an advisor to Bonten. After that Takeomi became the number two person in the Brahman gang.

When viewed from the data, it can be concluded that the Kanto Manji gang was the winner of the three-god gang battle. Then formed the Gang or Bonten organization which is the worst criminal delinquent gang. Even any kind of crime must have something to do with the Bonten gang. Starting from gambling, drugs, prostitution, murder, and other criminal convictions. But that was before Takemichi went back to 10 years ago to change it for the better. 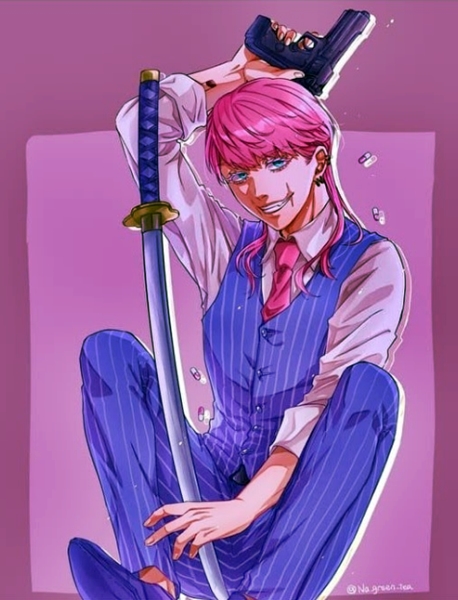 At the beginning of his appearance, Haruchiyo Sanzu is a young man who has long bleach blond colored hair. He also has eye-like highlights that have no purpose in life, coupled with slightly long eyelashes. Sanzu also has two scars on the corners of her lips that are her trademark. Usually, Sanzu wears a Tokyo Manji uniform complete with a black mask given from Mucho to cover the scars on both corners of her lips.

Before Haruchiyo Sanzu becomes the vice-captain of the 5th division of the Toman gang, which we can see in Tokyo Revengers chapter 206. When he killed Mucho, he was wearing a formal suit. At that time his hair was tied up and left a few strands of hair that covered one eye. He also wears two earrings and a sword that is used to kill Mucho.

Then in chapter 207, Haruchiyo Sanzu is seen wearing the uniform of the Kanto Manji gang. Now he also does not wear the black mask that Mucho gave. But he still maintained the shape of his long hair. Then as a grown man in chapter 199, Sanzu is seen carrying his pistol or sword into his mainstay weapon.

Sanzu's strength is certainly unquestionable because he is a former vice-captain of the 5th Division Toman. Sanzu can defeat some people alone. Even in the anime Tokyo Revengers episode 19, we can see his strength when beating one of the Valhalla gang members very brutally. Sanzu has now also become one of the top brass in the Kanto Manji gang. He was also the second man at Bonten.

In addition to being an expert in fighting, he also has the ability to be manipulative to others. At first, Sanzu looks like a very calm and trustworthy person, but he is actually a very manipulative person. It is evident when Sanzu fools Mucho, where Sanzu pretends to welcome Mucho from prison like a good friend in general. But behind it all, Sanzu has bad intentions. He takes Mucho to Yokohama Pier and kills him sadistically. Although the two of them used to be very close, the incident is known as the Kanto tragedy.

Haruchiyo Sanzu is a delinquent who has the ability to manipulate almost equivalent to Kisaki Tetta. Sanzu is also very loyal to Mikey. Even Mikey's safety was a top priority for him. He's not even interested in getting into the Brahman gang, he chooses to follow Mikey to be in the Kanto Manji gang. Sanzu is nicknamed a "loyal and loyal mad dog" He will not hesitate to kill anyone who dares to betray Mikey.