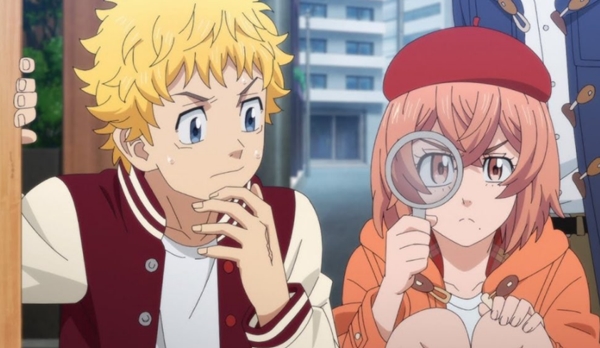 Anime Tokyo revengers Episode 23 which we took from Manga. In the previous episode, a lot of sadness occurred due to Baji's death. Starting from a fight between gangs into a heartwarming friendship story.

Actually, Baji does not intend to betray Toman, He just wants to act alone without bothering others. But it turns out that his estimate is wrong because he can't do everything alone. How does the story go? 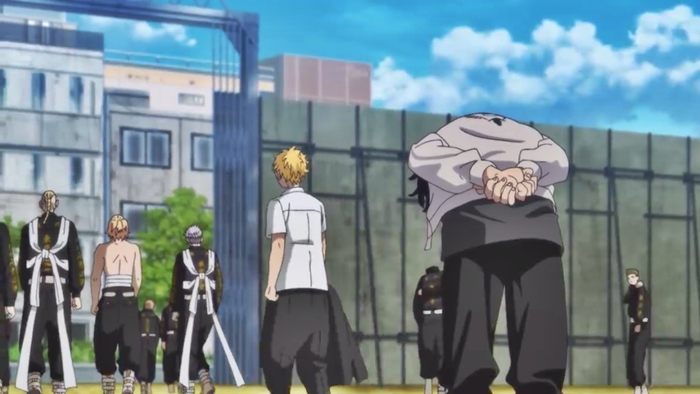 Let's discuss the storyline of Tokyo Revengers episode 23 this time. The final episode shows the sound of a police siren beginning to approach the scene of the fight, each gang begins to disperse quietly. But Kazutora decides to stay with Baji. He tells everyone to leave because Kazutora wants to take responsibility for what he has done to Baji. Draken then told all the Members of the Toman to disperse.
Then Kazutora called out to Mikey with a bruised face and moist eyes. Kazutora said I wouldn't ask Mikey to forgive him but, He will be responsible for Shinichiro and Baji's death. Then Kazutora bowed to Mikey. Mitsuya, Draken, and Chifuyu who saw it were unable to hold back their tears. Then all the Members of Toman started walking away from Kazutora who was still bowing in regret of his actions.
When the police began to surround the scene, Kazutora was still motionless and only saw the lifeless Baji. On Oct. 31, 2005, 150 members of the Toman gang fought 300 Valhalla members. The winner of the conflict is the Toman gang. But with one dead person and one prisoner arrested by police, the fight became known as "Bloody Halloween".
A few days after the fight, Chifuyu visited a tomb while carrying the Mie Peyoung that Baji wanted before her death. Chifuyu tried hard, then she cried knowing that Baji was really dead. Chifuyu said, he no longer knew what to do right now.
Draken and Takemichi visit Kazutora inside the prison. Kazutora gets 10 years in prison, Kazutora who still feels guilty said that his sentence is still fairly short for everything he has done. Therefore, he will receive the punishment well. Draken, who was familiar with Kazutora's mindset, asked him not to die now and not to attempt suicide. But Kazutora said he doubted if there was anything he could do now. Draken then said that there is a message from Mickey, Now or forever Kazutora is the Toman family. Hearing that Kazutora could only be silent with what Draken said. 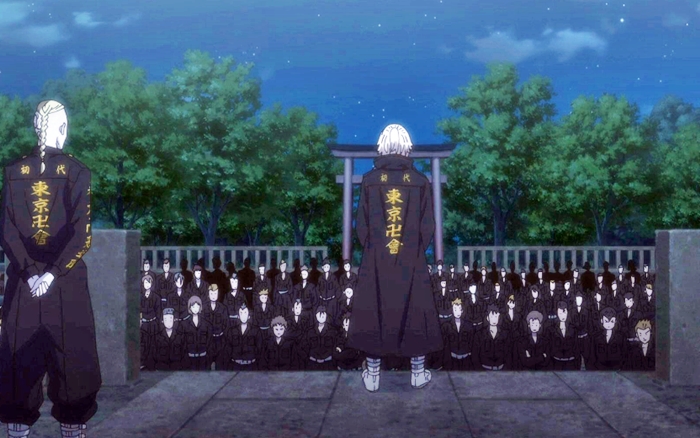 Continues to the story of Tokyo Revengers Episode 23. Takemichi is praying for Baji at the funeral, then the story goes back to Draken who continues the words of Mikey that he has forgiven Kazutora. When Draken and Takemichi are on their way home, Draken tells Takemichi that Mikey also has a message for him. Mikey said that at the next gathering he wanted to convey something important to Takemichi. So Draken tells Takemichi to come to the gathering. Takemichi who heard this was actually curious about what Mickey would say.
But Takemichi also feels scared because he failed at the bloody Halloween events of Baji dying and Kazutora is detained. But at least Mikey doesn't kill KazutoraTakemichi confused whether Kisaki failed to take over Touman in the future? Everything will be answered at the next gathering.

Takemichi is invited to Draken's house in the middle of Shibuya City. Takemichi is surprised that Draken lives in a very luxurious apartment. After getting upstairs, Takemichi couldn't believe what he saw. He saw a woman who only used a thin negligee, so that he saw the panties he was wearing. It turned out that Draken lived in an apartment where he was in prostitution.
Takemichi looks nervous about where he's going, then he accidentally sees one of the customers cutting his nails. Soon, the man went to the toilet. Suddenly a woman appears who says thank you for ordering, sorry to make you wait. Then Takemichi was taken away to take a shower first. Takemichi who still doesn't understand what's going on can only obey him.
Takemichi who was bathing next to the woman started thinking of something dirty and wild. He wondered if Draken intentionally gave him a gift to become a grown man? The woman is seen opening her pants while saying that she is happy that Takemichi became her customer. But suddenly a hand touched takemichi's door, the woman said can I enter?
Takemichi with his dirty mind immediately opens the door, but it turns out to be the hand of his friend Draken. Draken who saw Takemichi naked could only be astonished, Takemichi then came out of the bathroom and was immediately shocked because in front of him there was already a woman who was naked.  The woman looks annoyed at Draken for having Takemichi wait in a special guest room.  Draken only replied with a laugh then Draken told him that he did not have parents so he was cared for by the people who worked in this place.
Draken then invites Takemichi to his room. There he says that Takemichi is one of his friends who has been invited to this place besides Mikey. Takemichi then sees a photo of Draken along with the rest of Toman. Draken then said that all the members of Toman were valuable people to him, including the dead Baji. Draken said that he originally wanted to kill Kazutora because he had killed Baji. But he understands that if the action is wrong, Draken then thanks Takemichi for stopping Mikey.

Moments later takemichi is seen returning home from Draken's house. On the way Takemichi ponders if he can't do it all alone. Moreover, he fought to save the people he loved. Takemichi then recalled a photo of Emma with Draken. There he understood that draken really loved Emma Sano. Takemichi is convinced that the two of them will be a good couple. 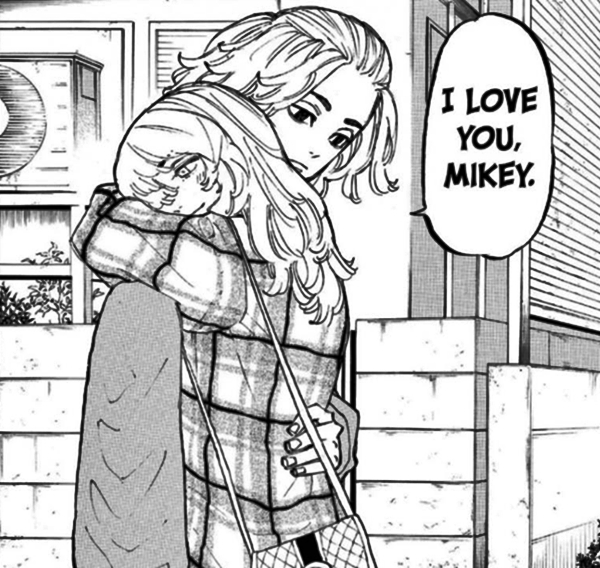 Shortly thereafter Takemichi sees Emma passing in front of him. As he was about to greet her, he saw Emma hugging another man. And it turns out that the person embraced by Emma is Mikey. Takemichi could only see with a face full of disbelief, Takemichi couldn't believe what he saw. If Draken sees this, he and Mikey will fight right away.
Takemichi, who was still worried about what was coming, suddenly saw Hinata Tachibana who was already beside him. Hina also noticed Mikey and Emma, there she said this looked like a scandal. Hina is with Naoto, Takemichi who sees the two of them instantly startled and wondered. Hina who seems confused by Emma's affair with Mikey begins to intend to find out. He said he would solve the mystery.
Naoto who sees his brother acting like a detective can only tell Takemichi to follow his will. Because Hina is fond of detective series. They also took a peek at Emma and Mikey who were eating at a café. Hina then said if she saw the radiance of emma's eyes when she saw Mikey. Takemichi who wants to see Emma's eyes begin to shake with a large chest owned by Emma.
Hina who saw Takemichi noticed something else immediately hit her in the face. Then suddenly one more person appears, he is one of Takemichi's friends. They also started talking about Emma and Mikey, he said if he heard rumors about Emma and Mikey who are often seen coming out together from Mickey's house. 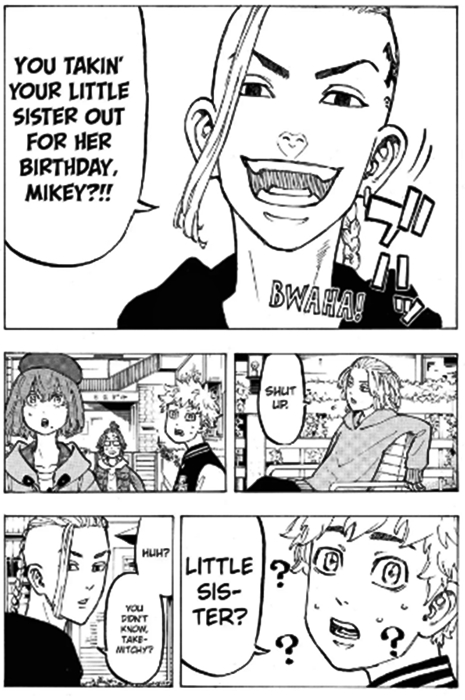 Hina who heard that immediately let out a sharp look while pointing towards Mikey and Emma while saying that he had already solved the case. It's no longer wrong Emma is a cheater, then Hina asks Takemichi to come with her to go to Draken's place because she feels sorry for him. But Takemichi is scared and says that Draken might be very sad if they see them at the same time.
But suddenly Draken appeared from behind Takemichi saying, who do you feel sorry for? Takemichi who saw Draken behind him only seemed resigned while breaking down tears of fear. While Hina immediately caught Emma and Mikey who were in the café saying "you two are the worst" Emma saw Draken also there immediately looked panicked, Hina also looked shocked.
While Takemichi was already like a person about to die, Draken who was already staring at them seriously suddenly seemed to be holding back laughter. Then Draken said to Mikey "Are you asking your sister to celebrate a birthday? Mikey? Takemichi, Hina, and the others were instantly shocked to hear that. 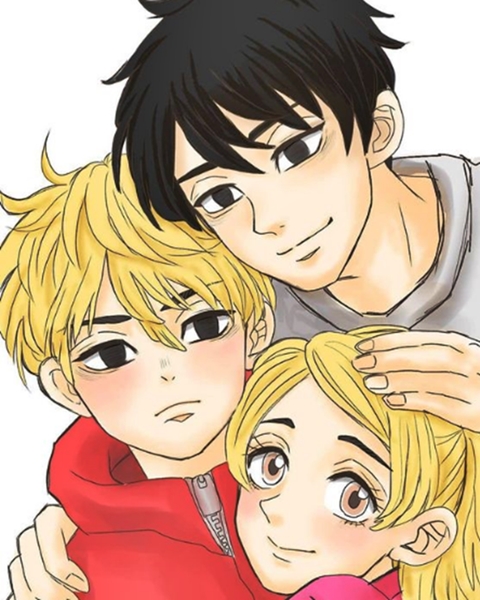 Draken who is aware they have not understood the situation immediately tells them all that Mikey and Emma are half-brothers. Takemichi looks annoyed at being insulted and the others immediately take their eyes off and pretend to do something else. Then Draken put a doll in Emma's head saying "Happy birthday yes" Then Draken left Emma and Mikey.
Those who saw Draken give a gift to Emma could only tell if Draken was a very cool man. While Emma seemed very happy to receive a gift from Draken. Hina and Takemichi who saw Emma's happiness immediately said "I hope our relationship is smooth too" Takemichi immediately replied while holding Hina's hand. Then they ran away from Yamagishi and Naoto. The Tokyo Revenger Episode 23 chapter ended.

In this Tokyo Revengers anime, we are shown that Kazutora is finally starting to accept responsibility for everything he has done. Kazutora considers that a sentence of 10 years in prison is too light for his guilt. Mikey also sent a message that he had forgiven Kazutora. In fact, he would as long as consider Kzutora as part of Toman. So what about the next Tokyo revengers episode? Look forward to the interesting discussion here.
Next Post Previous Post
Tokyo Revengers