The Childhood Story of Chifuyu and Baji

The story this time is actually quite light because there are no fight scenes from the characters in this manga. But even so, this story is quite able to answer the big questions that always arise in the Tokyo revengers anime and manga lover community.  How did they meet? Did Chifuyu and the wedge meet in the first place? And what about Baji and Chifuyu's lives when they were both very young?

Since childhood, Chifuyu has loved to fight

The story begins when Chifuyu was still in elementary school. One day, Chifuyu fights with another child her age. But unfortunately, in that fight, Chifuyu had to lose because it turned out that his opponent brought many friends and immediately beat him to the ground. At the end of the fight, Chifuyu had to sit helplessly limp under the rain that poured down on his body.

At that moment, little Chifuyu accidentally heard the sound of a cat meowing right next to where he was sitting. Without hesitation, Chifuyu approached him and immediately helped him. As he picked up the cat, he was shocked to see the scar on the black cat's head. From here little Chifuyu realized if it turns out that this little cat is a warrior or fighter as well. Same with him, therefore Chifuyu finally gave this cat the name EXCALIBUR.

The story of Chifuyu with his cat named Excalibur 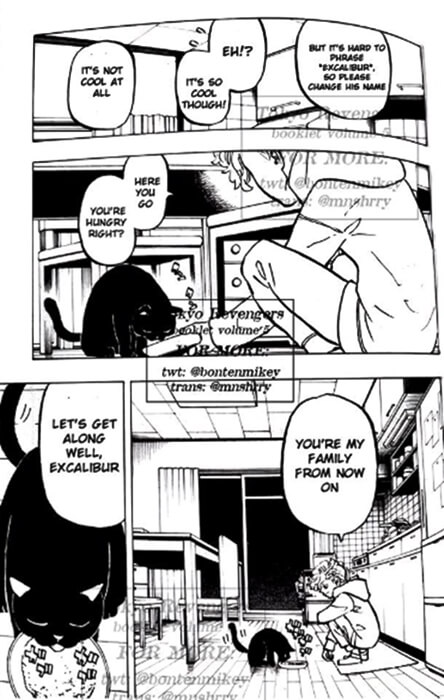 The moment has now moved on, arriving at the house Chifuyu immediately scolded his mother for being involved in fighting or fighting again to make his body battered. But not stopping there, his mother also scolded Chifuyu for coming home with a stray cat that he found earlier. Without lingering, Chifuyu immediately went to the bathroom to clean himself and the black cat named Excalibur.

Chifuyu tried to explain to Excalibur, Chifuyu said "You don't have to worry about my mother, I know for doubt she will tell me to throw you out or let you back on the streets. But take it easy, over time he will definitely give up as well and be willing to accept you."

He then dried Excalibur's body, but it seemed like Excalibur was afraid of the extremely loud sound of the hairdryer, making him try to keep breaking away from Chifuyu's embrace. Furthermore, Chifuyu also said something to Excalibur, about him who from now on will use a pompadour haircut like this because next year Chifuyu will start his life as a junior high school student at his new school. According to Chifuyu, a haircut like this is very cool and scary at the same time and suitable for scaring criminals. Then Mother Chifuyu asked, is Chifuyu able and able to take care of this black cat alone? Because it was clear his mother wouldn't want to help Chifuyu take care of him.

Not only that, but Chifuyu's mother also said that she would never forgive Chifuyu if Chifuyu couldn't take care of her cat. And just do it half-heartedly. Hearing all the words from Chifuyu's mother then replied. "Back when dad was alive he said something to me!" If anyone else is facing difficulties or problems, you should always help them! I met Excalibur when he was dumped alone in the rain and hungry. Since I am my father's son, then I will definitely help and take care of Excalibur with all my heart! After all, I look a lot like dad, right?" Hearing all the words from Chifuyu, his mother's heart melted, and finally, Chifuyu's mother allowed him to care for and care for the Excalibur at home.

But at the end of this conversation, his mother asked Chifuyu to change the name of this black cat, because the name Excalibur was very difficult to pronounce. But it seems like Chifuyu has absolutely no intention of replacing him because he thinks Excalibur is a really cool name. Starting from here, Excalibur eventually became a new family member in his home.

Currently, Chifuyu was confused as to why in the last few days Excalibur did not want to eat all the food given to him? And why these days black cats don't want to be called by the name Excalibur? Then the black cat immediately jumped out the window and left the Chifuyu and all the food that had been provided. Seeing the black cat's strange behavior, Chiufyu was shocked and wondered. Is this black cat sick?

Chifuyu and Baji are in the same apartment 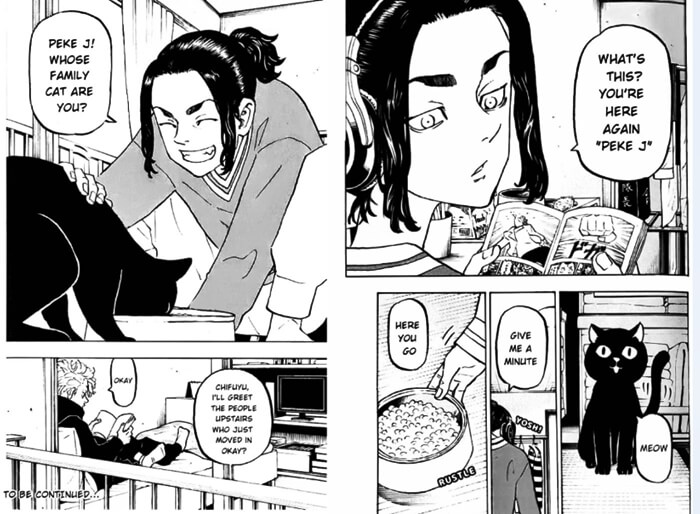 Excalibur quickly jumped over the window in this apartment and went straight up to the top floor of Chifuyu's apartment. This time it was a very surprising sight. In this panel, Keisuke Baji is seen reading Manga Tokyo Revengers while listening to her favorite songs. Baji realized that Excalibur was waiting for him in front of the window. Seeing the arrival of the black cat, Baji asked" What did you peke J do why did you come again today? Wait a minute, I'll get you some food!"

Baji quickly gave a bowl of food to the Black cat named by Baji as Peke J. At that time, Baji immediately approached Peke J and stroked Peke J's head while asking which family kept such a smart cat.

Meanwhile, in Chifuyu's room, she hears her mother's voice saying goodbye to Chifuyu. His mother said she was going to visit a new neighbor upstairs who had just moved in a few days ago.

That's a little interesting story about the childhood of Chifuyu and Baji, this story revolves around a black cat. Chifuyu named him Excalibur, while Baji named him Peke J. The story of Baji Chifuyu Peke J is interesting enough, right? In the anime, it is told that the beginning of Chifuyu's meeting with Baji was when they attended school in the same place.