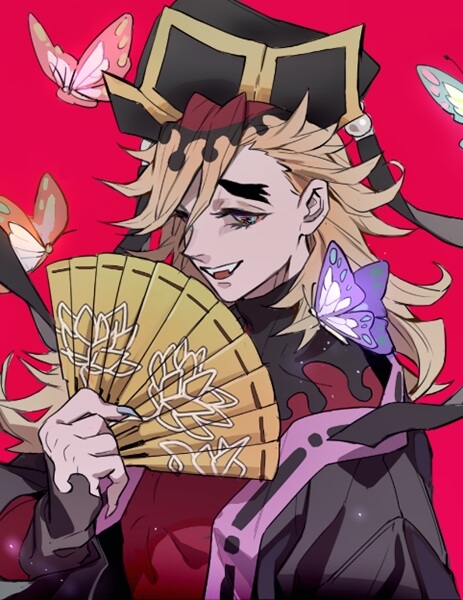 Doma is one of the antagonistic characters in the Demon Slayer Kimetsu no Yaiba series. He was also a member of the second rank top moon demon. During her life and after her transformation into a demon, Doma was known as the leader of the Eternal Heaven sect left behind by her parents. Although known as the leader of a religious sect, Doma is actually an atheist who does not believe in the existence of God and the existence of heaven and hell.

Being one of Muzan's strongest pawns, Doma Upper Moon Two also has a slightly different character from other moon demons. He is described as psychopathic and has no emotions, a trait similar to Kibutusuji Muzan. It's just that Doma often shows a cheerful face when doing sadistic things.

Doma's special trait is her tendency to target women for food, as he believes it is an act to free their souls. Unlike Akaza who refuses to eat women, so it's only natural that Akaza hates Doma's existence. It was this woman's eating habit that would also kill her because after eating Shinobu's body which turned out to be filled with poison, it eventually weakened Doma's body and made her suffer defeat.

In addition, Doma is the most played demon in the lives of several characters in the series, where he is responsible for the death of Inosuke's mother, the deaths of Kanao and Shinobu Kocho, as well as a role in transforming Gyutaro and Daki, become a demon. 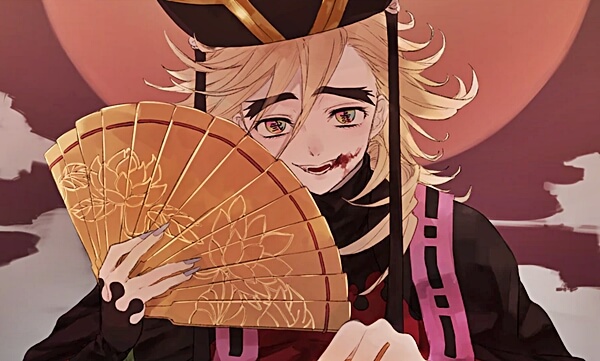 Doma is the leader of the Eternal Paradise Cult

Doma was born about 260 years ago, and her family came from a sect called Eternal Heaven. Since her birth, Doma was seen as a holy being by her parents and sect followers, as Doma was born with silver hair and rainbow eyes in her own. This then made him receive preferential treatment since childhood, and later Doma will be prepared as the successor of the leader of his family's sect.

But behind all these advantages, actually, Doma has a very different character to young children in general. He has no empathy for those around him and only sees his followers and even his parents as ignorant and pathetic human beings.

While living in his sect's temple, every day many people came to beg and ask For Doma even though he himself felt strange to see people worshipping him. When the person asks Doma to take him to heaven, Doma actually cries not because he is sad, but because he considers how stupid he is. Because according to Doma, heaven and hell never existed. Doma also considered that Gods and Buddhas were just fairy tales made by humans, and according to him if humans died, then they would return to nothing and would feel nothing.

It can be said that since childhood, Doma already has an atheist view. While the Eternal Heaven sect led by his family was a fairly famous sect and had many followers, the majority of whom were women. The situation then made his father as the sect leader use his position to have an affair with some of his followers. This disturbed his mother's mental health.

When Doma was a child, her mother killed her father by stabbing him many times because he was constantly having an affair, and after that Doma's mother committed suicide by drinking poison. Although this terrifying series of events happened right before her eyes, Doma didn't show any expression other than being irritated by her parents' blood contaminating their sect's space. He then went out for a breath of fresh air and casually ordered his maid to clean up his parents' corpses. 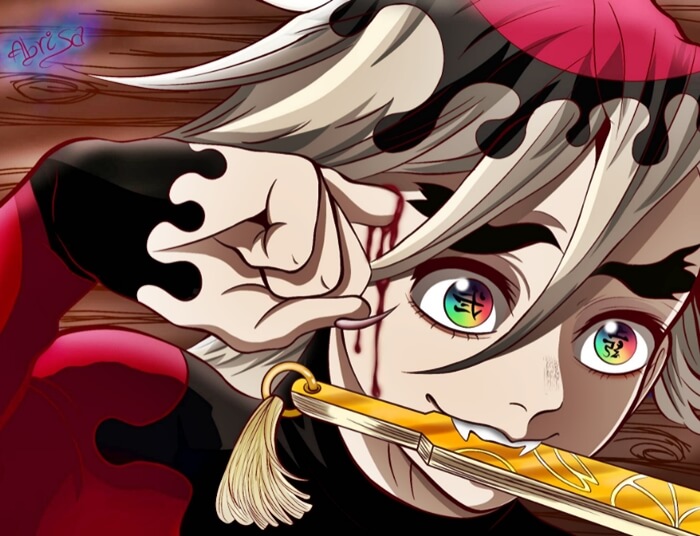 Many years after that Doma led her own sect and had many followers. When he reaches the age of 20 the demon lord Kibutsuji Muzan comes to him and then turns Doma into a demon.

Long story short, Doma then managed to rise to become the sixth top moon demon, and at the same time, while searching for prey in a nightlife district, Doma instead met Gyutaro and Daki who were dying of severe injuries. Doma then offers to turn Gyutaro and Daki into demons and save them by giving her blood.

Doma then advises Gyutaro and Daki to become powerful demons, so Muzan will acknowledge them and make him a member of the upper moon demon. Following her feat of which has taken thousands of victims and becomes stronger, Doma then rises to become a second moon demon above her own senior Akaza.

15 years before the Tanjiro era, Doma has a brief history with Kotoha Hashibira who was Inosuke's mother. He hosts a runaway Kotoha with Inosuke who is still the baby of her abusive husband and in-laws for continuing to torture her. Not long after, Kotoha's husband and mother-in-law accidentally join the sect. Doma then kills them simply because they are too noisy.

Although Doma considers Kotoha to be as stupid as any other human being, her beauty and singing talent convince Doma not to eat it and let Kotoha live her life. But that changes after Kotoha accidentally discovers that Doma is actually a cruel demon for eating her own followers. Although Doma tries to give Kotoha a blessing, Kotoha feels deceived and frightened, so she runs away from the temple with Inosuke.

But the escape doesn't last long, Kotoha accidentally drops Inosuke off a cliff into the river in the hope that Inosuke will survive. Because he realized he was going to be killed by Doma.  Then Doma starts killing him quickly and then eats Kotoha's body until the bones are not left. 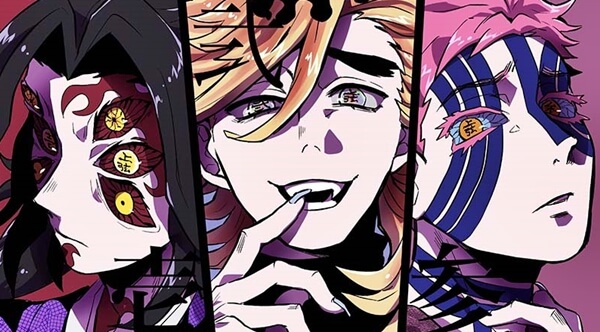 Not long after, Doma has the opportunity to meet and fight Kanae Kocho who is Shinobu and Kanao's older brother. Kanae suffers defeat in the fight, although Doma intends to eat her body, in the end, Doma is forced to withdraw from the fight because the sun rises and makes Kanae die of serious injuries. After Gyutaro and Daki are defeated by Tengen Uzui and Tanjiro's team, Doma is seen gathering at the Infinity castle as Muzan Kibutsuji gathers all the top moon demons.

Muzan looks angry when he hears Gyutaro and Daki lose and orders Gyokko and Hantengu to hunt down Hashira. Doma then offers to accompany Gyokko and Hantengu. But his head is suddenly decapitated by Akaza for disobeying Muzan's orders. Before Akaza launched another attack, it was stopped by Kokushibo who quickly cut off Akaza's hand. Although Doma tried to dilute the atmosphere, Akaza left them alone.

When the events of the final battle begin, the Hashira entering the Infinity castle begins to fight against the upper moon demon members, and Doma fights Shinobu in the final battle. But unfortunately, Doma is too strong for him, so Shinobu is defeated.

Shinobu who is dying then gives up her body to be eaten by Doma. It turned out to be part of Shinobu's own plan, not long after, Kanao appeared in the fight. Knowing his sister has been eaten by Doma, an enraged Kanao begins to attack the upper moon demon.

The fight goes unbalanced because Doma is still too strong until Inosuke suddenly appears and helps Kanao. Kanao and Inosuke start fighting and try to kill Doma, but Doma is still seen playing around when confronted by the two of them. After learning that Akaza has been defeated, Doma realizes that things are beginning to change and decides to kill Kanao and Inosuke immediately. Doma then makes three small crystal beasts that resemble herself to fight the two demon hunters, and he intends to leave the fight to kill all the Hashira. 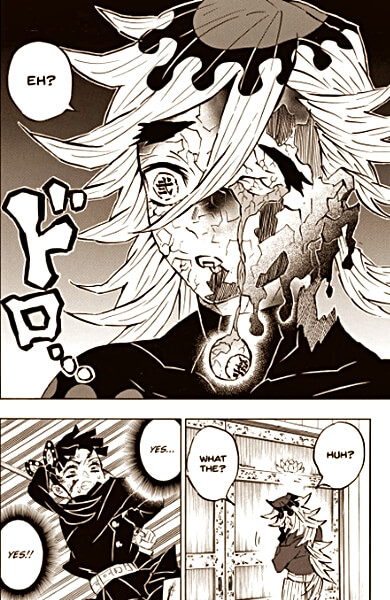 Kanao and Inosuke are cornered and nearly lose against three crystal creatures from Doma. But Kanao continues to encourage Inosuke to stay a little longer. As Doma prepares to leave her room, her face suddenly begins to melt and he falls to the floor with a severed hand. The other three crystal creatures also begin to crack and shatter, Inosuke then asks about what happened, Kanao then explains that it was all Shinobu's plan that had planted a deadly poison and deliberately let her body be eaten by Doma.

Seeing Doma begin to weaken due to Shinobu's poison, Kanao Inosuke then took the opportunity and managed to slash the head of the second rank moon demon. As her head begins to fall to the floor, Doma thinks of how miserable it is to lose to a Hashira like Shinobu who doesn't even have the power to kill demons by beheading her, in her final moments Doma says that he is not afraid of death or even frustrated given her past as a human being and her inability to feel any emotions.

Upon arriving at the afterlife, Doma meets Shinobu who holds her head and begins to believe in heaven and hell. And for the first time, Doma also feels love and begins to become attracted to Shinobu. Then he asked the Shinobu, did he want to accompany her to hell? Shinobu happily rejected him and called him a worthless creature.

Those were all the stories and facts about the Moon Demon Doma over second-ranked Demon Slayer Kimetsu no Yaiba.  Doma and Muzan Kibutsuji are the true images of the demonic figures in this animated series. Their characters tend to be sadistic and don't care about anything around them. That's the life story of one of the strongest demons and a second-rank moon demon member, Doma.