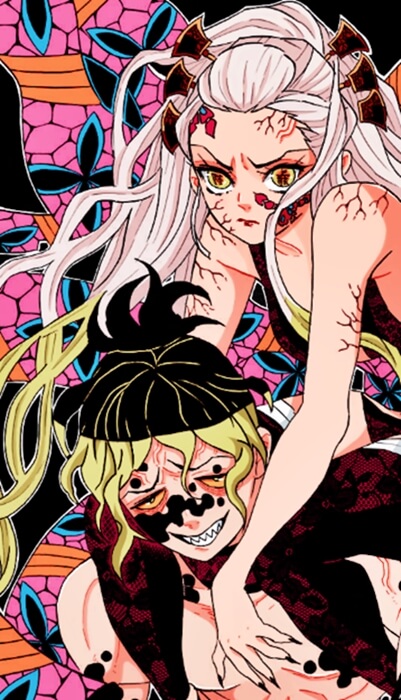 But the record for hundreds of years finally had to come to a halt when they fought Tengen Uzui alongside Tanjiro and his comrades. Although the fight later left Tengen Uzui with Tanjiro and his comrades on the verge of dying. But eventually, Gyutaro and Daki were defeated by beheading them simultaneously. With the deaths of Gyutaro and Daki, Muzan is angry because for the first time in hundreds of years one of the moon demon members suffered defeat against an army of demon hunters.

Gyutaro and Daki have a very dark story as they live as humans. The circumstances that even they had to deal with as a child with humiliation and such a harsh life in the district where they lived. What is the life story of Gyutaro and Daki Upper Moon to the 6th Demon Slayer? 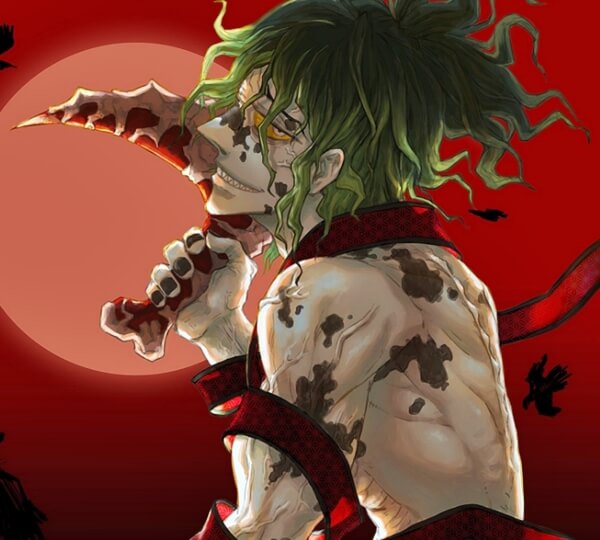 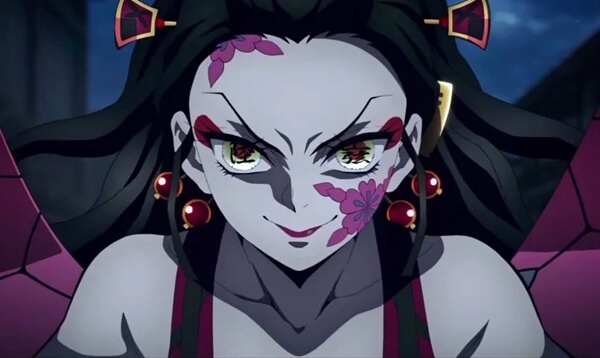 Gyutaro and Daki's Past Story

It started about 240 years ago in a district known for its nightlife. Their mother was a comfort woman who worked in the district. But because she came from the lowest caste, the mother had to experience social discrimination and her life was very difficult. It is also exacerbated by the harsh and poor competition conditions in the district where he lives. When the mother was pregnant with Gyutaro, she tried to kill herself many times but she failed to do so.

After Gyutaro was born in the world, his mother's nature became worse because he considered his son just a burden, and he actually tried to kill his own son. Luckily, although Gyutaro was born with a weak body like a twig, Gyutaro was able to withstand the torment of the mother who wanted to kill him. Gyutaro then grows up to be an unkempt and very thin child coupled with such a bad condition.

Living in the middle of the famous nightlife district always upholds the appearance of making Gyutaro have to experience insults and insults in his life, residents around the district will even throw Gyutaro's body as he passes in front of them. Gyutaro even had to eat rats and insects to survive. The only treasure Gyutaro had was a scythe he found from a customer.

Years later Gyutaro feels his destiny will change when his younger brother Ume is born in the world. Ume is the human name that Daki had before he turned into a demon. Unlike Gyutaro, Daki was born with perfect stature where his sister has a very beautiful and charming face but unfortunately still does not change the nature of his mother. His mother hated Daki for the color of his hair and eyes and intended to kill him as well. Knowing that his sister will be killed by his own mother, Gyutaro then becomes very angry and goes berserk. This made their mother afraid and distanced herself from him until finally their mother died of an illness. After the death of his mother, it made their lives even more difficult because they were homeless and ended up making them both live on the streets. 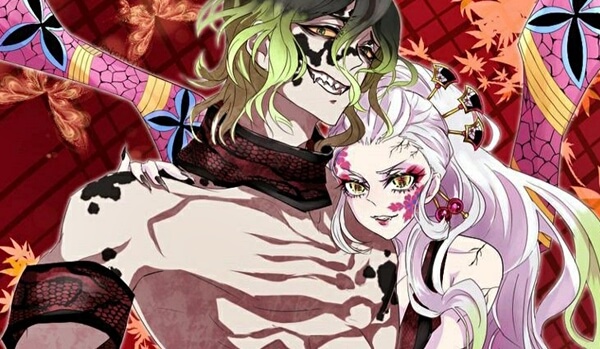 Daki and Gyutaro's struggle for life

Gyutaro must take care of Daki alone, though he promises his sister to stay together no matter what. Daki has a very beautiful physique, which even adult men and women will be attracted to when they see him. Because of her beauty, when Daki smiles, someone will give her a gift or something to take care of. This gradually changes the lives of Gyutaro and Daki. This gives them hope to rise from poverty.

Daki is then recruited to work at the district's most prestigious nightlife venue. Then he was given the training to become an Oiran. during his training to become an Oiran. Daki receives the best education and high-end service from where he works before his training is complete. Daki has even made a lot of money by attracting customers. Daki is known for his beauty, fame, achievements.

After that Gyutaro then began working as a debt collector in their district. Gyutaro becomes a debt collector who is famous for his strength and is also very cruel. This made everyone in the district afraid to face it. But all these circumstances suddenly end when Daki takes one of the eyes of his customer who is a Samurai. Daki did so because he did not accept when the Samurai insulted his brother's condition.

This incident made Samurai and his workplace manager angry. Daki was then dragged out for punishment. They then tied Daki's body, burned him alive, and left him to die in the gutter. When this incident happened Gyutaro was not with him because he was carrying out his duty to collect debts. When Gyutaro returns to see his brother, he is shocked to find Daki dying with his entire body blistered.

Gyutaro immediately hugged Daki and started screaming furiously over what happened to his sister. Then Gyutaro suddenly fell to the ground after his back was slashed with a sword by the Samurai. It turns out that this samurai deliberately cooperated with the manager where he worked to get rid of him. Then with the blink of an eye Gyutaro then got up and instantly killed his manager. The samurai is startled and tries to attack but Gyutaro quickly manages to cut off the sword and split the Samurai's head in half.

Gyutaro then starts carrying Daki's body and takes him around the city to seek help. Unfortunately the struggle was futile because no one in the district wanted to help them. When Gyutaro begins to fall from exhaustion and severe injuries, doma the upper moon demon approaches them. Doma comes after eating some geisha in the district and she feels sorry to see Daki and Gyutaro's condition.

Doma then offers Gyutaro to become a demon and out of spite in her heart Gyutaro accepts the offer. From then on Gyutaro and Daki finally survived after receiving blood from Doma. The blood turned them into demons. For years they terrorized and conquered the district where they lived. With this achievement, Muzan raised them to become the sixth rank top moon demon members as members of the upper moon demon.

As members of Twelve Kizuki Upper Rank 6, Gyutaro and Daki possess quite unique abilities and powers. Gyutaro is a powerful demon and is also very fast, he is even able to move places in the blink of an eye so that it looks like teleporting. Gyutaro also has the ability to transform flesh from his body into weapons and he has blood that can be controlled to attack or defend. Gyutaro's blood also contains a deadly poison that almost killed Tengen Uzui and Tanjiro. With all the advantages she has compared to her sister, Muzan admits that only Gyutaro deserves to be a demon member over Twelve Kizuki Upper Rank 6. 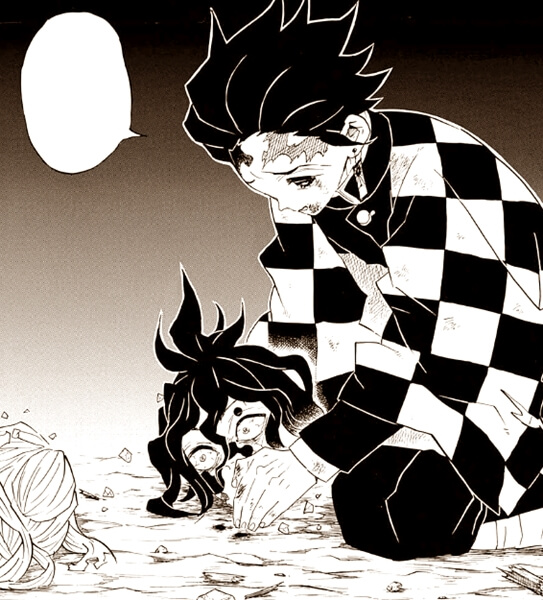 The Death of Gyutaro and Daki

Gyutaro and Daki are powerful demons as they are known to have killed and eaten at least 20 Hashira during their duties. But that achievement eventually changed after Tengen Uzui and Tanjiro and his colleagues came to their district of residence to carry out the mission. After going through an incredible battle in the end Gyutaro and Daki were defeated with their heads decapitated simultaneously.

At the end of their deaths, Gyutaro and Daki blame each other for losing. It made Tanjiro feel sorry when he saw it, then he advised them to stay united because they were actually brothers.

After the two were in the Afterlife, Daki who will go to heaven instead chose to join Gyutaro who went to hell. Gyutaro refuses Daki to follow him, then he remembers that they will stay together no matter what. Daki then jumped onto Gyutaro's back and in the end, the brothers walked together towards the hellfire.

Gyutaro and Daki's death makes Muzan so angry that he gathers all the top moon demon members inside the Infinity Castle and threatens them to do nothing wrong like Gyutaro and Daki. Other than Kagaya ubuyashiki, this victory was a good sign for the demon hunters because after hundreds of years they were finally able to defeat one of the upper moon demon members.

Those are some facts about Gyutaro and Daki Upper Rank Six Demon Slayer Kimetsu no Yaiba. Gyutaro is a very powerful demon, while Daki is a very beautiful demon. The story of their life journey is very sad. After years of being demons, they finally lost and died fighting Tengen Izui and Tanjiro and his comrades.