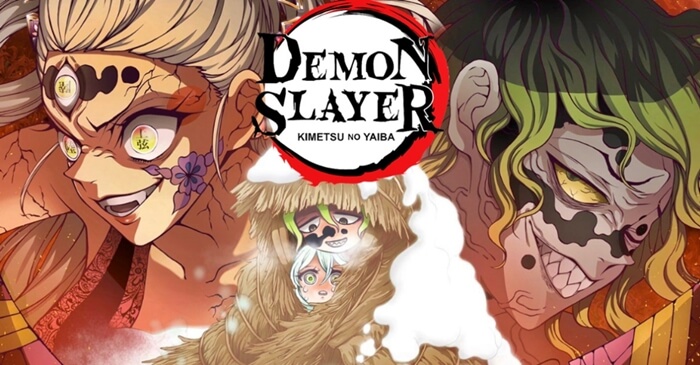 Demon Slayer Kimetsu no Yaiba Season 2 Episode 8 Makio and Suma came to help the residents around the battle area to stay away. On the other hand, Hinatsuru, who was previously ordered by Tengen Uzui to return home, actually approached the battle site.

And on that battlefield, Tanjiro who had just arrived was immediately frightened when he saw Gyutaro. According to Tanjiro, the demonic smell of Gyutaro is stronger than Daki's. Tanjiro feels that the top 6 moon demon's real body is Gyutaro, not Daki. Apart from his shaking hands, Tanjiro's legs also couldn't move. 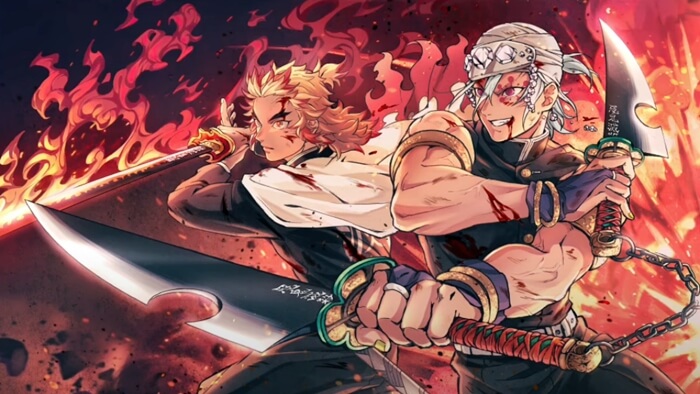 Tengen Uzui who knew about Tanjiro and the others said loudly that they would definitely win. Even though Uzui's words are denied by Daki because Uzui has been poisoned and will die. Uzui kept saying that he and his three successors would win. The way Uzui spoke was similar to Rengoku Kyojuro in the previous fight. And now Tanjiro respects him more than the first time they met.

Then Daki attacks Uzui while he is off guard. Daki's attack with his scarf almost hit Uzui, but quickly Zenitshu who was still asleep thwarted Daki's attack and chased him to the roof of the house, followed by Inosuke who helped him. 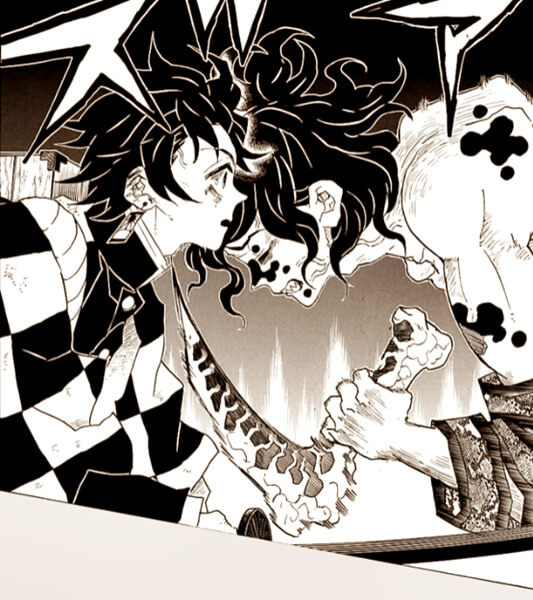 While in the house, Uzui and Tanjiro will fight Gyutaro. But Tanjiro is still scared, let alone knowing that Uzui has been poisoned. He thought of fighting while protecting Uzui. But suddenly Gyutaro attacked him and almost stabbed him in the throat. Luckily Uzui quickly threw Tanjiro and attacked Gyutaro.

Then Uzui and Gyutaro's fight happened again, but Daki didn't let it. Daki attacks Uzui from the roof with her shawl. Daki attacks blindly with her scarf so that the roof of the house collapses and interferes with Uzui's fight. Gyutaro who saw this then attacked Uzui with two front and rear attacks.

Uzui was able to deal with attacks from the front while avoiding the rubble. But Gyutaro's attack from behind with his blood technique could not be avoided by Uzui. Tanjiro who was previously silent in fear, then helped him fend off attacks from behind. Tanjiro also attacks Daki's shawl which annoys Uzui.

Seeing this, Uzui was surprised because previously Tanjiro seemed unable to do anything because of fear. Even Tanjiro tied his hands with swords from shaking. Even though he can fight, Tanjiro's physical strength has reached its limit, and needs to recover his breath.

Suddenly Hinatsuru came to help, she bombarded the battlefield with her kunai. Gyutaro was surprised by the attack because his attack could hit Uzui. But it was deliberately planned and Uzui knew it. Uzui then attacked Gyutaro and managed to cut off both of Gyutaro's legs.

At that moment the kunai from Hinatsuru managed to hit Gyutaro's neck, causing him to be unable to regenerate his legs. Gyutaro argues that the Kunai has a layer of wisteria flowers.

Then Tanjiro put all his strength into aiming at Gyutaro's head. However, Gyutaro was suddenly able to regenerate his legs because he was only hit by one kunai with a slight layer of wisteria flowers. Gyutaro then counterattacked with an "Enzan Senkai - Tobi Chigamo" attack.

Uzui finds it impossible for Tanjiro to withstand the attack. Then Uzui kicked Tanjiro so he was thrown far back. While Uzui resisted Gyutaro's attack alone by using his smoke bomb.

But suddenly Gyutaro's presence disappeared, apparently, he went to attack Hinatsuru by clutching his face. Hinatsuru could not move, at that time Tanjiro was thrown far while Uzui was blocked by Daki's shawl when he wanted to save him. At that time Hinatsuru started reminiscing about the day before the entertainment district mission started.

Demon Slayer Episode 8 of the Entertainment District arc will be released on January 23, 2022. You can watch it on Netflix, Crunchyroll, or Funimation.