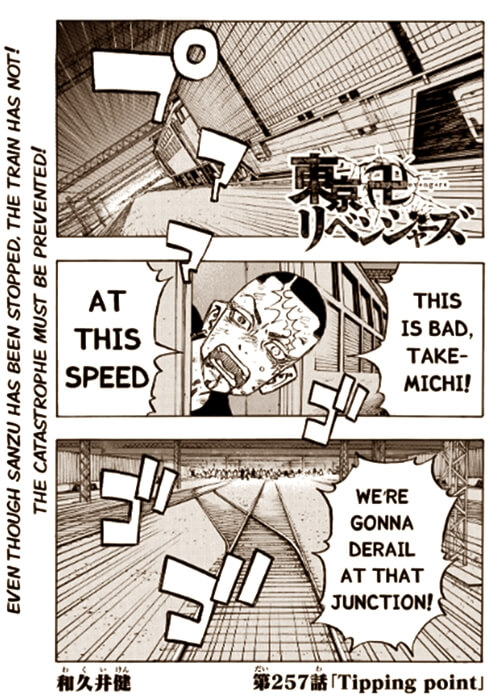 At the beginning of Tokyo Revengers chapter 257, we are surprised by a tense scene. At that time, it was seen that the train continued to drive faster and faster and even looked impossible to stop. Realizing this, Kakucho immediately looked out of the carriage to check the track in front of them.

Takemichi and Kakucho Try to Stop the Train 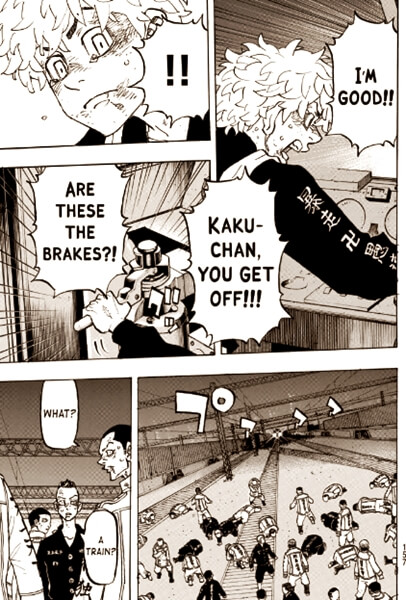 Kakucho then said "Takemichi, we will never stop this train! Try to look in front, there are intercessions! If we continue to drive at full speed, this train will try over and overall everyone!"

In the chaos, Takemichi looks confused and doesn't listen to everything Kakucho says. Full of emotion, Takemichi said "Fck!! I don't know where is the brake button, If this continues like this, everyone will be killed here!

Isn't that ironic? Even though at that time Kakucho and Takemichi managed to defeat Hruchiyo Sanzu by throwing Sanzu's body out of the train. But in fact, this time the two of them had to face a much more serious problem. In a matter of seconds, the chariot will soon reach the battlefield and hit or kill everyone in front of it.

Knowing that Takemichi became more and more panicked. Because no matter how hard he tried to press all the buttons on this train, He still couldn't make his train stop.  Full of anger, Takemichi shouted "Aaaaa!! Stop!!"

Sanzu's State After Being Thrown Off the Train 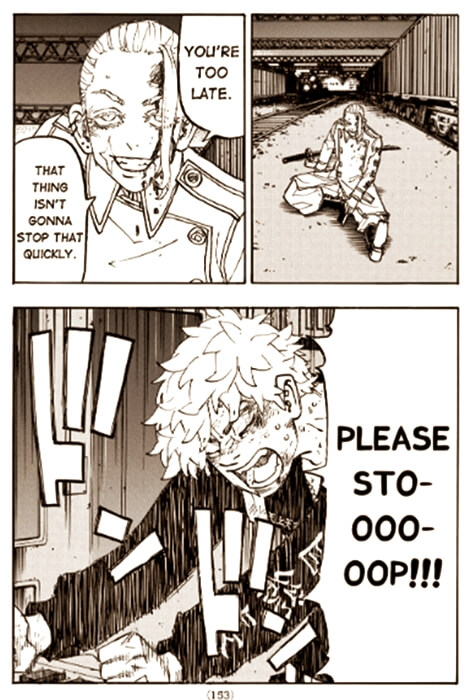 Meanwhile on the other side of the battlefield. We are again shown the latest condition of Haruchiyo Sanzu. Even though he felt hurt because he was hit by a blow from Kakucho. But in fact, Sanzu is still able to survive and can still bounce back to enjoy the important moments where the culmination of all his plans is about to happen.

At this time with a smile and relaxed Sanzu also said. "Haha.. Everything you do is useless! When the carriage is running at full speed, then no one can stop it!" 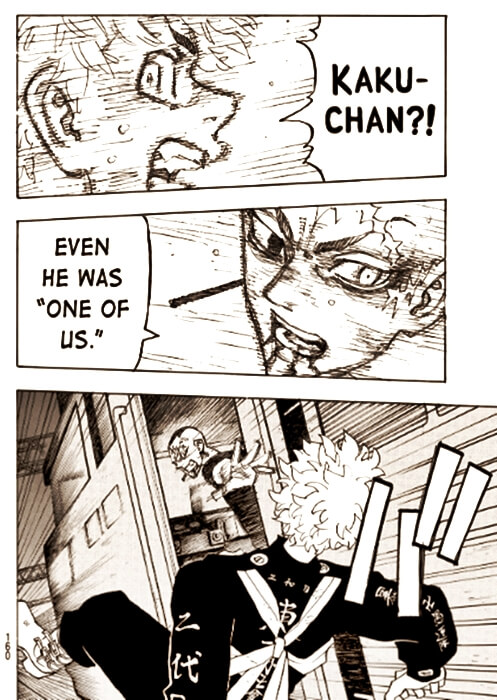 After a while, Kakucho slowly began to lose most of his strength. At this moment unconsciously, Kakucho suddenly coughed and directly vomited a lot of blood from his mouth. Although there is no text explaining what happened to Kakucho at the moment but based on these 1 panel of manga, we should all understand that Kakucho has reached its limit. Because he has lost a lot of blood from the incision scar on his body.

On the next panel, Takemichi, who was still confused, finally shouted "Kakucho quickly help me stop this train!"

However, when Takemichi looked back, it turned out that Kakucho couldn't stand up anymore, and the incision wound on his body was getting wider and wider. Seeing this, Takemichi said in his heart "Huh! It's a wound from Sanzu!! Damn, I didn't expect The wound is so deep!!" In this desperate decision, Takemichi could only shout at the crowd in front of him. Although none of them heard the screams from Takemichi.

Kakucho finally regained consciousness and said "Takemichi! Get out of here quickly! If you don't leave, then you will be killed too!" But it seemed that Tkemichi would not listen to Kakucho's words, and instead replied to all of Kakucho's words "No Kakucho!! I'm fine!! Hurry up and get out of here"

After pondering for a moment, Kakucho suddenly burst into tears realizing that he couldn't hold on any longer. His consciousness slowly faded, Therefore He had to act quickly. Without hesitation, Kakucho wants to sacrifice himself to save Takemichi and everyone on the battlefield. Quickly Kakucho asked Takemichi to get off the train, and he immediately pushed Takemichi's body out of the carriage.

Kakucho said goodbye to Takemichi by saying "Takemichi! I envy you! No matter what happens, you always put the interests and safety of others first!! That being the case, leave it all to me this time!! I will definitely clean up all the mess that Sanzu made!!"

Everyone on the battlefield looked at the approaching carriage. Whether it is from the Tokyo Manji camp or from the Kanto Manji camp, they look very resigned. Neither of them tried again from this location. They realized that no matter how hard they tried, they would not have time to escape.

The Arrival of Kurokawa Izana 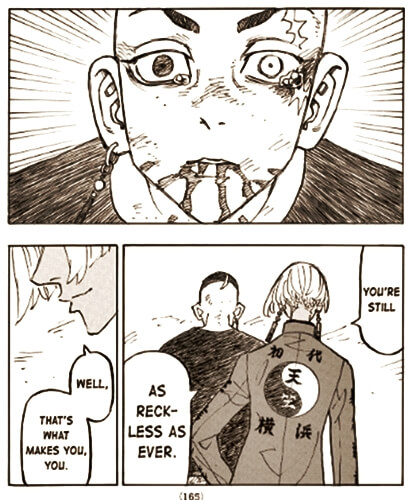 At this time Kakucho had completely given up and thought that he had failed. Because no matter how hard the Kakucho tries, the brake lever will not move at all. However, in the midst of this tension, Kurokawa Izana finally returned.

Izana calmly patted Kakucho on the back and said "Haha... Without my presence, it turns out that you are still as careless and reckless as ever!" Not only that, on the next page, Izana also continued his remarks. "But don't worry Kakucho! Whatever happens... I will always help you!! “

Although at first Kakucho had resigned himself to the bad luck that was about to befall him. But after hearing all the words and encouragement from Izana!! Kakucho was suddenly able to maintain his consciousness and was able to think clearly again.

Trains Can Be Stopped By Kakucho and Izana 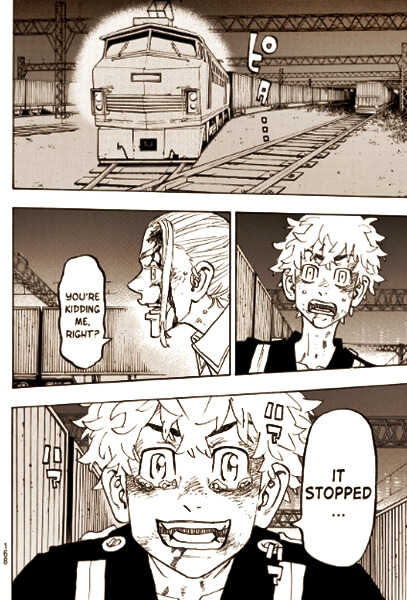 On the next panel, we see Izana's hand holding Kakucho's hand and trying to pull the brake lever together. Finally, the train can be docked at the right time.

Those were some of the important points of Tokyo Revengers Chapter 257. Eventually, the train was stopped by Kakucho and Izana. Everyone from both the Tokyo alleys of Manji and Kanto Manji can be saved. Does Kakucho get killed? To find out the answer, check out the discussion about Tokyo Revengers only on animeposted.com