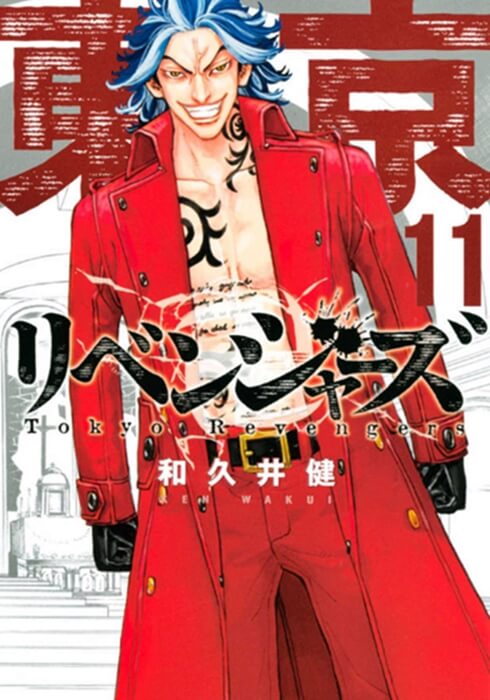 Taiju Shiba is the antagonist of Tokyo Revengers and the former leader of the 10th generation of Black Dragon.

Taiju Shiba is a very tall and muscular man, easily towering above others. He is the second-highest character featured so far. Her hair was blue and white and left long and tied up. He wears a custom Black Dragon uniform, where his uniform jacket is longer and red. He left his uniform jacket exposed, showing his chest. He has a tribal tattoo laid out in a series of vortices on the left side of his neck all the way to his chest and a cursive tattoo underneath.

There is a giant cross tattoo on his back. He displayed a crazy grin and showed all sorts of unusual expressions such as one eye-opening wider than the other and the veins of his forehead poking out during a fight or while excited.

He was a brutal and abusive man but he remained religious. He enjoys torturing his opponents and doesn't care much about the welfare of others, even his own siblings. He doesn't care who his opponent is, even if he is facing a woman/girl. He trained the 10th generation of the Black Dragon gang, completely reforming it to act like an army. He was very rude towards his brothers, to the point of beating them for unimportant things.

He is an arrogant individual, believing in the supremacy of his fighting abilities and the strength of his gang. In addition, he was very charismatic, really captivating the hearts of his followers.

Despite his appearance and abusive personality, Taiju Shiba is a very religious Christian. He went to church alone to pray at Christmas every year.

He actually loves his two brothers very much, but his excessive protective attitude turns into domestic violence. 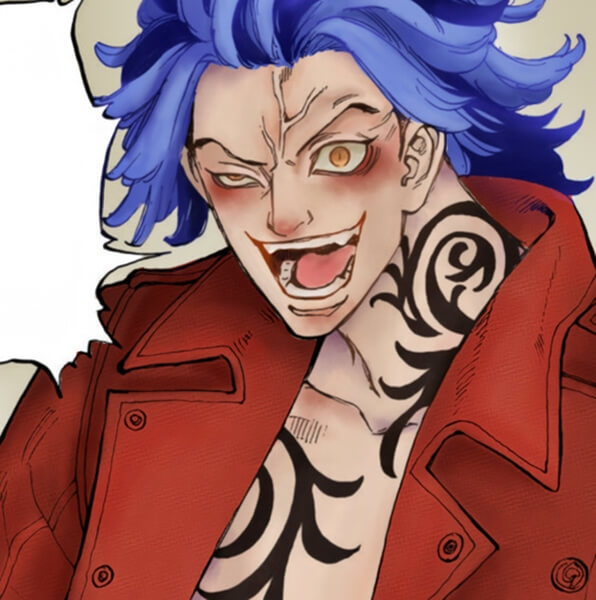 As long as he becomes the leader of the 10th generation of Black Dragon, he has absolute control over the powerful gang, directing and commanding them as he pleases.

Under Taiju, the Black Dragon became extremely tough and united, with others observing how it was almost like an army. Taiju, along with his impressive strength, is also very charismatic. Not only did his followers obey him out of fear, but they also did so out of respect for him as well.

Taiju's strength is one of the biggest in the series. His punches had knocked the enemy unconscious or some of the others ran away in fear. He had lifted the stool with one hand and threw it easily. In fact, Takemichi said that he had never been hit by a blow that was even as powerful as Taiju.

Taiju is a very powerful fighter. The punch is destructive and the endurance is amazing. Taiju easily defeated the Elite Toman, who were very competent warriors in their own right. He was the only person in the series to knock Mikey out with one punch, even if Mikey made that punch on purpose. He ignored the knife stab wound and continued to face several opponents.

In addition, he also woke up quickly after being hit with full force by Mikey's signature kick. Because he is unparalleled because of his amazing raw power, after all, Taiju obviously never takes the time to hone fighting techniques, so he fights in a rough and hard way, being able to use brute force to gain his way all his life. This, along with overconfidence in his strength, was the main reason for his defeat to Mikey.

Not only is Taiju smart enough to take advantage of his assets, such as having Koko raise funds for his gang, but he himself is also financially competent. At this time, he opened a high-end restaurant and was very successful.

Taiju Shiba led the 10th generation of the Black Dragon gang and completely reformed it to act like an army. Taiju was very rude towards his brothers, to the point of beating them for unimportant things. Taiju actually loves his two brothers very much, but his excessive protective attitude turns violent.