Tengen Uzui is a Hashira with sound breathing techniques. He is one of the important characters in the Anime and Demon Slayer manga Kimetsu no Yaiba. Possessing a tall and stocky body and long white hair, Uzui has a very eccentric nature that he always wants to look prominent compared to other Hashira. 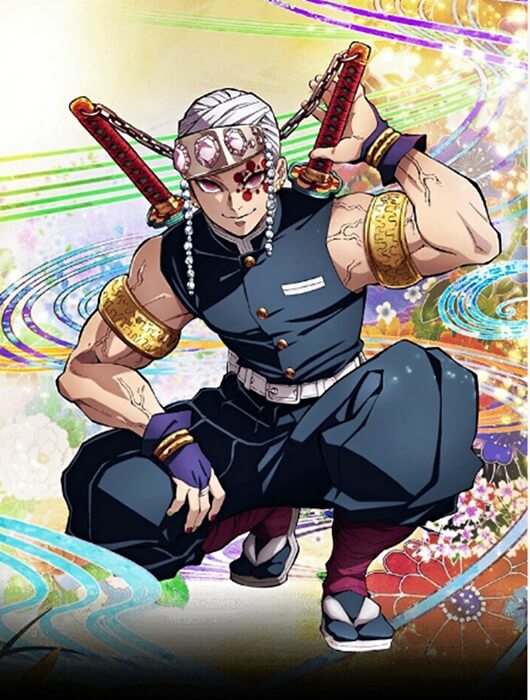 Uzui is known to come from the shinobi clan family, so that is what affects him in terms of appearance and also his ability to fight. Similar to Gyomei Himejima, Uzui has a unique weapon in the form of two large nichirin swords as its main weapon. The two swords are connected by a long chain. In addition, in his life, Tengen Uzui was also a lucky pillar because he had a wife, even he had three wives at a very young age.

During his battle against the 6th over the moon Demons, Gyutaro, and Daki, Uzui had to suffer a very serious injury. He had to lose one of his arms as well as blindness in his left eye. This is what makes Uzui the second pillar after Jigoro Kuwajima who decided to retire due to injury after fighting against the Demons. Even so, Uzui still had an important role during the final battle arc, where he and Shinjuro Rengoku were assigned to protect Kiriya Ubuyashiki while leading the battle. The story of Uzui's life began 23 years ago when Uzui was born with 8 brothers in a family of shinobi clans. Living in a shinobi clan family made Uzui have to undergo so much training at a very young age, that this then made his 3 brothers have to die before they even reached the age of 10 years.

One day during his training, their father orders Uzui and each of his brothers to go on separate missions, where they are required to kill their enemy targets. But unfortunately, the mission is just a trap made by the father because it turns out that Uzui and his brother were forced to kill each other.

Uzui and his brother did not know this because his father deliberately told them to wear masks, and Uzui only realized it after killing his own two brothers. This incident forces all his brothers to die in a trap mission, leaving only Uzui and one younger brother left.

Years later the father continued to provide very rigorous training for Uzui and his younger brother, and his father reasoned that this was the only way to preserve their shinobi clan. The father also continues to instill the ideology of Uzui and his younger brother to prioritize mission above all else, even though the mission must sacrifice the lives of innocent people, or even his own family. In addition, the Uzui clan family also practiced polygamy from an early age, so at the age of 15, Uzui was then forced to marry three women at once, which woman had been chosen by the head of his family's clan. Although Uzui was deliberately formed by his family clan as a killing machine, Uzui completely disagreed with all such thoughts.

However, Uzui's younger brother adopted this mindset and used every means to complete their mission, thus this led Uzui to decide to leave his clan and leave with his three wives. During his escape, Uzui began training his wives Makio and Suma and Hinatsuri to become good shinobi and abandoned the teachings of their clan family. During that time, Uzui was sad because he thought about whether he should go back and destroy his clan, but Uzui gave up because he was unable to kill his own father and brother.

Uzui and his three wives then decided to go see Kagaya Ubuyashiki, and he has since officially joined the Demon hunter army. Shortly after joining and playing the role of a Demon hunter. Tengen Uzui was later promoted to Hashira with good breathing techniques before Sanemi and Kochoshinobu merged.

Uzui was first shown attending a meeting of the Hashira at Kagaya's house, where they determined the fate of Tanjiro and Nezuko. There, Uzui expresses his distaste for Tanjiro and Nezuko's relationship, and he even says that he will behead Nezuko. 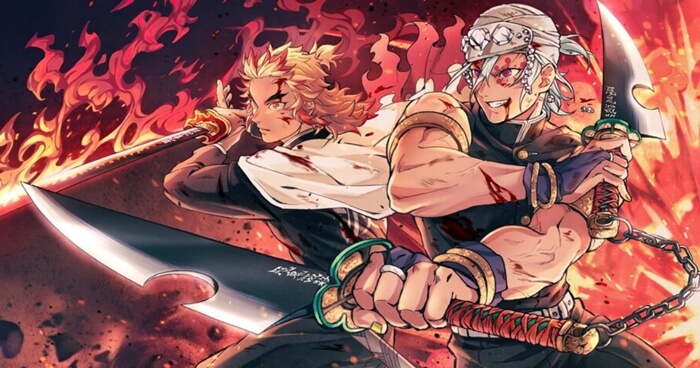 Uzui was seen again after the end of the Mugen Train arc, although Uzui did not participate in major battles during the arc, he expressed concern over the death of Kyojuro Rengoku. Four months after Rengoku's death, Uzui is seen coming to the Butterfly Mansion and trying to kidnap Aowi and Naho to help with their mission. But Tanjiro, Zenitsu, and Inosuke then come to the girls' rescue and ask the Uzui to take the three of them instead.

On their way to the entertainment district, Uzui then explains that they will investigate the existence of Demons there, and search for the disappearance of his wife in the entertainment district. To carry out his plan, Uzui again explains that Tanjiro and Zenitsu, and Inosuke will each be sent to one of the 3 brothels there. So that they can gather information about their mission.

Once they arrive at the localization district, the Uzui seem to disguise the three of them as women and place them in every brothel to begin their investigation. Meanwhile, Uzui will hide and monitor the activity in each house, while waiting for information from Tanjiro and Zenitsu, and Inosuke.

But after Zenitsu disappears, Uzui immediately senses danger and orders Inosuke and Tanjiro to abandon the mission for their safety. Uzui then goes to the house where Zenitsu is on duty, and immediately presses the manager there, so that Uzui learns that his wife, Hinatsuru, has been sent to a lower-end brothel, and Zenitsu is kidnapped by an oiran named Warabihime.

Uzui then came to where Hinatsuru was and immediately gave him medicine, then Uzui ordered Hinatsuru to leave the district immediately. Upon returning to the district in search of his wife and Zenitsu, Uzui suddenly hears a voice from the underground cave and immediately enters it, which turns out to be where his wife, Makio Dansuma, is being held. Meanwhile elsewhere, Inosuke who had also entered the cave finally managed to find Zenitsu, and tried to free her.

Long story short, after freeing them all, Uzui along with Inosuke and Zenitsu then begin to search for Daki's whereabouts. It wasn't long before he found Tanjiro trying to hold Nezuko out of control for fighting Daki, and Uzui then quickly beheaded Daki with his sword. However, it turns out that Daki's body actually began to split, and Gyutaro finally emerged from Daki's body. After discovering the truth behind Gyutaro and Daki's presence as top 6 ranked moon Demons, Uzui finally engages in a fierce battle with the Devil. Gyutaro managed to poison the Uzui during their fight, restricting the movement of the Uzui. But with the help of Tanjiro Zenitsu and Inosuke and his 3 wives, they finally managed to defeat Gyutaro and Daki, although in the fight it turned out that Uzui had to lose one of his hands and left eye.

At the end of the battle, Gyutaro poison has spread throughout Uzui's body resulting in his inability to speak, and when he starts dying of poison, Nezuko then uses his Demonic blood art to burn the poison. Shortly after the Demon hunter corps arrived, Uzui then informed Obanai that he had officially decided to retire from the Demon hunter army.  After Kakushi clears their battle venue, Uzui is seen being helped by his three wives to leave the area and begin his retirement.

However, although he has officially retired as Hashira, Uzui was again seen helping in the final training with his wife, where he was tasked with overseeing first-rate basic stamina training. Uzui once again plays a role with Shinjuro Rengoku to protect Kagaya's children Kiriya and Kanata and Kuina in leading the final battle, against Demon lord Kibutsuji Muzan.

As a Hashira with voice-breathing techniques in the Demon hunter army, Uzui's ability to play the sword was definitely unquestionable, and he was also one of the strongest Hashira. This is evident from how Uzui is able to spread his power when fighting the upper moon Demons Gyutaro and Daki, where Uzui not only fights the devil but also protects other Demon hunters at the same time.

Uzui also has a sense of hearing above the human average, so with this ability, he is able to read the movements of opponents and take advantage of their movement gaps to attack. As a shinobi, Uzui's body has also been shown to have a high resistance to poison, where he looks able to continue fighting even under the influence of the deadly poison Gyutaro.

Uzui's physical strength was also incredible, as he could use his two large nichirin swords with just 2 fingers, and Uzui could still keep up with Gyutaro despite having lost one of his hands. In the arm wrestling contest between Hashira, Uzui ranked second only to Gyomei who outperformed him. Another fact is that Uzui has an army of trained rats capable of lifting swords, and, Uzui's Nichirin sword can also have a fatal explosive effect on its enemies.

That are some interesting facts about Hashira Tengen Uzui in the anime Demon Slayer Kimetsu no Yaiba. Tengen Uzui's age is 23 years. Tengen Izui's wives are Makio, Suma, and Hinatsuru. Pretty interesting isn't it? He is a very strong figure, although he finally retired due to injury. But what he had done for the Demon hunter was very much in the admiration of many people.