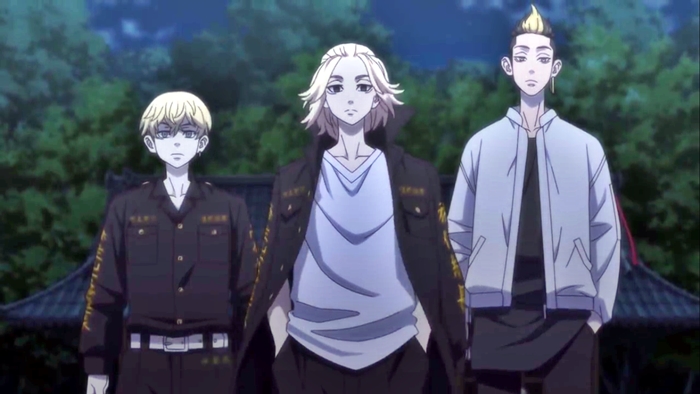 This time we're going to talk about Tokyo Revengers Episode 24. The battle between Toman versus Valhalla was won by Toman's side. However, it provides deep wounds due to the death of Baji Keisuke.

After the "Bloody Halloween" incident, Toman finally held an important meeting to discuss something. Toman's meeting finally begins and the story begins with the confusion of the Toman members. Why would an enemy of theirs be in the middle of this important Toman meeting? Takemichi is also surprised by Hanma's presence behind Mikey.

Takemichi tells Draken that Mikey will tell him something important, but what's really going on? Here Chifuyu and Hanma are above the Toman Tribune with Mikey. Finally, the meeting began with Mikey's remarks to all toman members. "Halloween bloody Valhalla against Toman even though we were outnumbered, you can all survive and bring victory to us. Shuji Hanma is the deputy leader of the Valhalla that we defeated there is a message that he wants to convey regarding Valhalla."

Hanma with a flat face came to the front of the stands and said to all of them. I Shuji Hanma from Valhalla never had a chairman, therefore after our defeat. We're going to join you under the Toman banner. Valhalla is now affiliated with the Tokyo manji gang." Takemichi and the other Toman members were surprised. The members of Toman are seen accepting the joining of Valhalla with Toman. With this, the number of Toman which was originally 150 people changed to 450 because it was added with 300 personnel from Valhalla.

While not Takemichi, he really feels worried and thinks of something in his heart. Wait a minute if they join us it's like combining the two gangs? Mikey didn't kill Kazutora on a bloody Halloween, Toman won but why did this happen? Takemichi thought. 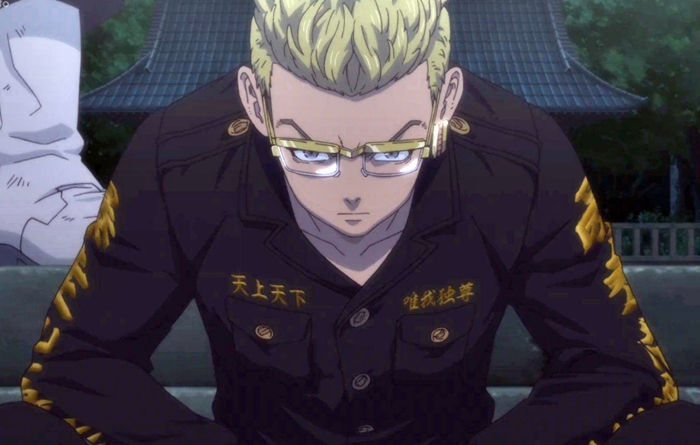 Tokyo Revengers Episode 24, then the scene returns to Hanma. He says that someone helped connect the two gangs. Thanks to his help all this can happen. Please come forward to Kisaki Tetta, Hanma said. Hearing Kisaki's name, Takemichi is surprised that he remembers the last message from Baji. That their real enemy is Kisaki Tetta. And indirectly arise Kisaki tries to take over Toman and after this Toman will become an evil organization, Takemichi thought.

Although Baji gives up her life to protect Toman, Kisaki will still take Toman. With this, Takemichi feels he has failed. But the announcement from Mikey has not been completed, there is one other important announcement. 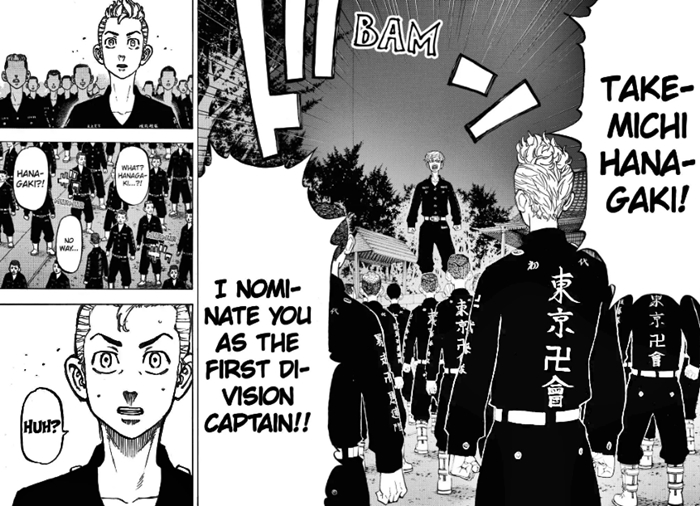 Mikey said although we get a lot out of bloody Halloween. We also lost one of our members, first division captain Keisuke Baji died that day. Mikey invited the vice-captain of the 1st division chifuyu to give a response regarding the incident. Listening to his name mentioned, Chifuyu began to step foot in front of the stands.

Chfuyu said, "I decided to leave Toman, but our leader stopped me by saying this" you want to turn off the spirit of division one? Leading division one is a big responsibility for me. I've been talking about this with the Chairman for days. And to this conclusion, I mentioned the name of the man I wanted to follow, chifuyu said.

With a serious look on his face, then he shouted a name that was really familiar to anyone. "Takemichi Hanagak, I appointed you as the leader of division one." Takemichi and all the Members of Toman were surprised to hear this. Takemichi then said to Chifuyu, Hi what does this mean?

NextChifuyu tried to explain to Takemichi. I believe this is what Baji and our leaders want. And I hear that Baji handed this responsibility to you. Said Chifuyu. Takemichi lowers his head, but not Mikey. He shouted Takemichi's name and told Takemichi to raise his head and give his response.

Takemichi also briefly reminisces about the future where Naoto asks him to save Hina. Akkun asks himself to save them all, his promise in front of the flames that made Hina die. Takemichi also once said that he would be the leader of Toman.

He also recalls the last message from Baji, that he handed Over Toman to Takemichi. "I can still change Toman," Takemichi said to his heart. Then he loudly shouted ready to do my best. Seeing Takemichi's silly behavior, Draken, Mitsuya, and Mikey smiled. And with this, the appointment of Takemichi to captain from the first division became the conclusion of the Toman meeting this time.

After the meeting was over, Takemichi thought of everything and admitted that the situation had become even worse. Valhalla is now joining Toman and he has been appointed first division captain. In this bad situation, there is still hope left.

Takemichi Travels back to The Past 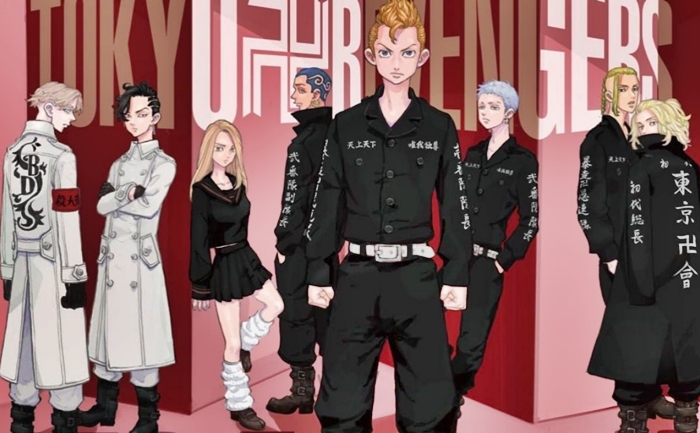 Next Takemichi is at the Tachibana residence, Takemichi wants to try to look to the future. By shaking hands with Naoto to make sure if all this is okay? And the time jump finally happened. He wants to save Toman and Mikey. And also thanks to Baji, Mkey did not kill Kazutora. It should prevent Mikey from turning into a bad guy. But along with Kisaki, even Hanma joined Toman. So sooner or later Kisaki and his subordinates will take Toman from within. But there's still something I can do, Takemichi said.

Takemichi has finally returned to the future, right in 2017. 12 years in the future. He had been at work one last time, but the difference was what he was wearing now. Expensive bags, expensive watches, as well as different hairstyles. It's as if Takemichi in the future this time is a different person from the previous future.

Seeing that all this has changed, Takemichi becomes confused until he exits the rental store. Takemichi is greeted by a bespectacled man, at that time Takemichi does not know the man. Then the man immediately told Takemichi to get into his car.

Halfway through Takemichi said, where are we going? Then the bespectacled man replied. Hah, what do you mean? We're going to your house, as you ordered. Here Takemichi just realized exactly what they were talking about. Did I order these creepy people? I don't understand at all. Takemichi said to his heart. A panicked Takemichi finally opened his phone. There was no Naoto number at all until the car finally stopped.

Then the bespectacled man waits for Takemichi, Takemichi finally gets out of the car. He was surprised by what he saw now. A warm welcome from everyone who was there, and said "Good morning sir" out there turned out to be a lot of delinquents waiting for Takemichi. One of them said you're Takemichi late.

Seeing this situation, Takemichi becomes increasingly confused and feels that he has ever seen them all? Until one of them said "Yamagishi did your job right" recalling Yamagishi's name, Takemichi was surprised and in his heart said, "is that person really Yamagishi? Until he realizes that the person is Makoto and Takuya.

Takuya and Makoto tell Takemchi to enter a very tall building. Takemchi who saw this was shocked to learn that they were members of Mizo Mid and asked in his own heart if he this time in the future had succeeded?

Takemichi Becomes the Executive Of The Toman Gang 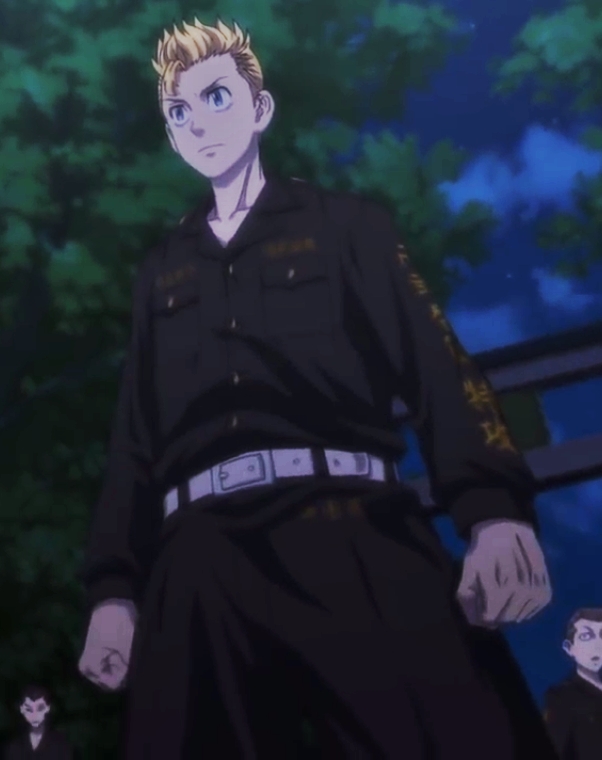 Takemchi finally entered into a space that was there. He was warmly welcomed by the people inside the building. There was also a chief waiting for him, Takemchi then rushed towards Chifuyu and immediately asked him. Chifuyu I don't understand what's going on here, chifuyu then said "Huh what are you talking about? We have an Executive meeting." Hearing that Takemichi then asked, Hah board meeting? Whose manager? Chifuyu then replied, come on who else's a partner if not you? Tokyo Manji  Executive of Takemchi Hanagaki”. Listening to these words Takemichi was surprised to find out that he was now the manager of the Peak in Toman. Then Tokyo revengers Episode 24 is over.

In the spoiler of Tokyo Revengers episode 24, did Takemichi's efforts this time pay off? By joining him as first division captain? Does in the future Takemichi really change Toman? You can also stream Anime Tokyo Revengers sub English on September 18, 2021. Look forward to the next story only on this website.