This time we will discuss the One Piece anime episode 1014. In this episode, it will be very exciting because we will see Marco who will fight Queen and King. Here it will also be shown how Kids will intend to fight Kaido itself.

In One Piece Eps 1014, Luffy will go to Kaido's place. At that time the army of the Ming tribe had been massacred by Kaido. They were badly injured and here Luffy thanked the Ming tribal troops who fought for their lives. Luffy said, "I will never forget your service". After that Luffy ran fast towards Kaido's place.

And the story moved to Marco who fought hard against Queen and King. It looks like King and Queen are having a hard time against Marco. King couldn't touch Marco, he said “damn what kind of untouchable power is this” and then Marco also said “Let's let him through” and Marco threw Zoro away. He was surprised that Marco threw it right away without telling him.

After that One Piece Episode 1014, the story moved again to Momosuke and Yamato. Yamato tells that he found a book belonging to Kozuki Oden, Momosuke's father. "In the book, it says you were born on the Whitebeard Ship, not after that you also went on the Roger ship," Yamato said to Momosuke. And in this book, it is also written that in the next 20 years there will be a new era and a very strong young pirate will emerge. Yamato said I think one of those powerful pirates is Hiken no Ace. But it turns out that Ace is dead. But at that time Ace told me that he has a younger brother who wants to be the Pirate King. And Ace also said, "Never laugh at his sister's dreams". After that the story moved again in the future, Yamato told all these things to Momosuke and Shinobu.

Then the story moved again to Luffy who went to Kaido's place. In the end, Luffy arrived at Kaido and big mom's place. Kid, Law, and Killer finally face Kaido and Big Mom for the second time. Kaido laughed at Luffy and said "want to know what this boy said in front of me?" then Big Mom replied that she is very bad and she has destroyed my castle, you owe me a straw hat.

Luffy then approached the Samurai who had been lying down after fighting Kaido. Luffy said, "you are fine now, please forgive me for being late". Luffy is very sad to see his friend being slaughtered by Kaido. He looked sad that he couldn't save Wanokuni Country. Luffy asked Trafalgar Law to move the Samurai. After that Luffy was very angry, then he turned around and immediately hit Kaido. With one punch of Luffy, Kaido immediately fell to the ground. Seeing this made Big Mom and everyone shocked. 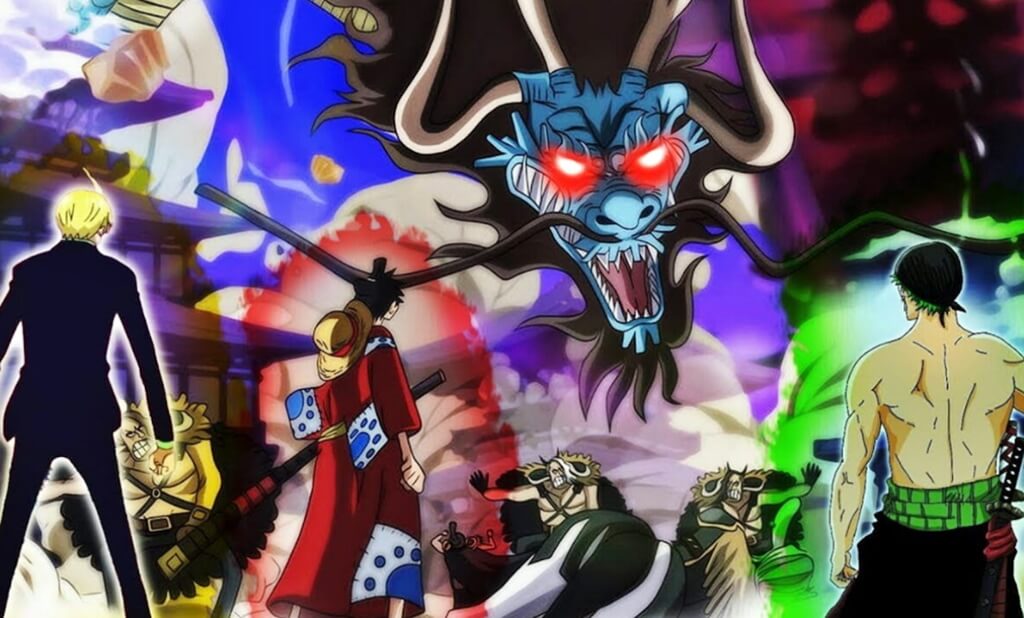 Anime giant Toei experienced a cyberattack over the weekend that caused the delay of One Piece Episode 1014. Toei said that the anime studio detected unauthorized access to their system on March 6, 2022.

They also give notice of having to shut down all internal systems as a safety precaution and launch an investigation into the incident.

"We are investigating the details, but we are also conducting an investigation by an external specialized agency to ascertain whether information about customers and business partners and personal information is included," Toei said in a press statement.

Animeposted.com also has not received definite information regarding the release schedule for One Piece episode 1014. For the latest information, please revisit this article.

That's a little review about One Piece Episode 1014 which will air later. The story is very exciting and interesting, is not it? Finally, we will come to the main fight against Kaido.